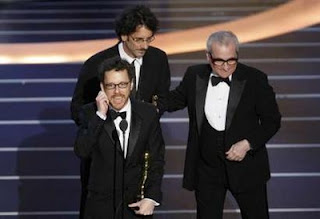 UPDATED: It was No Country For Old Men's time to shine at the 80th annual Academy Awards. It took home four awards including Best Pic. The night actually had some surprises up its sleave and i'm not just talking about Transformers NOT winning for Visual Effects... Julie Christie went home empty handed; Marion Cotillard took home the Oscar! I said she should win and I'm very happy for her (although I predicted wrong grr!) But that's ok, cause I totally went against the crowd for once and predicted Tilda Swinton for Supporting Actress. My final tally stands at 14 out of 24 awards. Not too shabby... Winners are listed in BOLD.

‘Tis that time of year again. The most captivating television event of the year! (No, it’s NOT the Dancing with the Stars finale) It’s Oscar, Oscar, Oscar! Time to throw caution to the wild and hunker down and try to figure out who will take home the Oscar in 24 glorious cinematic categories. There are the locks and the uncertainties. And if I had to pick one ultimate, “there’s-no-way-he/she/it-can-lose,” it would have to be ‘Ratatouille’ for Best Animated Film. If you marked either two films on your Oscar ballot, then I don’t even know why you’re reading this. Anyways here I go trying to attempt to out guess every other film freak in the country with my fearless Oscar predictions:

Best Picture:
Will Win: No Country For Old Men.
Sure it’s violent and gritty and has a WTF ending. It’s simply the most Oscar-esque of the nominees. If this was 10 years ago, I’d bet the farm that Atonement would grab this, but not this year. (And besides you can instantly rule it out because of it’s lack of editing AND directing noms). Juno is that little comedy that could and a win would be a genuine surprise, but even Little Miss Sunshine couldn't overcome The Departed’s loaded gun last year. (Athought Jason Reitman's nomination is a strong indication of Juno love, home skillet). I hear the Academy loves Michael Clayton, but the film doesn’t have the scope the voters look for. And that leaves There Will Be Blood, a movie that seems to polarize people (I disliked it FYI) but I think if the Academy is going to go with a bloody epic, they’ll choose No Country.
Should Win: No Country For Old Men.
Technically, according to my Top 10 list for the year, I liked Juno better. And I think it would be awesome if Juno took the top prize and it would show that the Academy isn’t just an old foggy broken hip group, but a truly hip group. But for sheer cinema experience, I think No Country is the best film of the five.
Should Have Been Nominated: The Diving Bell & the Butterfly.

Best Actor:
Will Win: Daniel Day-Lewis, There Will Be Blood.
I disliked the movie but agree that Day-Lewis is just a force of nature. He’ll be one of the strongest locks of the evening, and you’d be wise to mark your ballots accordingly. Although Hollywood loves George Clooney and Johnny Depp they’ll have other shots down the line.
Should Win: Daniel Day-Lewis, There Will Be Blood.
Even though I didn’t really care for the film, I’ll be the first to say that he deserves to take this prize.
Should Have Been Nominated: Ryan Gosling, Lars and the Real Girl

Best Actress:
Will Win: Julie Christie, Away From Her.
Technically, Julie Christie isn’t quite the lock that Day-Lewis is, but this I’m predicting that the Academy will honor screen siren Christie. She won over four decades ago and she’ll probably win again. I think Ellen Page has a decent shot, but I can’t really see it happening. Although weirder things have happened. And then there’s…
Should Win: Marion Cotillard, La Vie en Rose.
I think hands down, Cotillard deserves to take this prize. If you were one of the 13 people that saw this film then you would probably agree with me. She takes that standard bio-pic and makes it watchable and captivating. Her transformation from 19 year old to 49 year old is fantastic and she does the best lip-syncing since Ashlee Simpson. If only her performance wasn’t subtitled…
Should Have Been Nominated: Amy Adams, Enchanted.

Best Supporting Actor:
Will Win: Javier Bardem, No Country For Old Men.
It’s possible that creepy Bardem is an even bigger lock than Day-Lewis. This amazing performance is the stuff of Hollywood legend. Although I’m not sure what the legend is exactly but that sounded pretty good didn’t it? He creates one of the best screen villains of all time. Eat your heart out Dracula and Frankenstein; there is a new movie monster here to stay.
Should Win: Javier Bardem, No Country For Old Men.
I don’t really believe in giving an acting Oscar simply for lifetime achievement, which is what many who predict Hal Holbrook to win will be thinking. If you know me at all you know that I loved loved loved Into the Wild and Holbrook is one the best aspects of it. However, I think it’s an honor to be nominated, even at 82 year of age. This is Bardem’s to lose.
Should Have Been Nominated: Max von Sydow, The Diving Bell & the Butterfly

Best Supporting Actress:
Will Win: I HAVE NO IDEA, so I’m guessing Tilda Swinton, Michael Clayton.
This category is tougher to call than Live Action Short, (not really but you get my drift). This is really a four way race, with little Saoirse Ronan left out in the cold, fighting for scraps. Ultimately I believe it would come down to Cate Blanchett and Amy Ryan, but I don’t think the academy likes these movies as much as the critics. Ruby Dee is the “veteran” of the group so she’s a possibly spoiler. But for slapping Denzel Washington? Please! That’s why I must go with Swinton, who is great at playing an important character in Michael Clayton which is a movie the Academy loves. And since this is a great year for villains, why not!
Should Win: Amy Ryan, Gone Baby Gone.
She really owns that movie. As a drug-addict non-mother of the year, Ryan simply outshines every other actor onscreen (all of whom are very good). She is so good in fact, you can’t believe she’s acting. You really think they got some crack addict from the slums of Boston to play this role. Now that’s acting.
Should Have Been Nominated: Catherine Keener, Into the Wild

Best Director:
Will Win: Joel & Ethan Coen, No Country For Old Men.
Why? Because this is “their year.” They won the DGA award which is almost a sure sign of a repeat win here. And besides, could you have seen anyone else direct this film besides this brilliantly crazy duo?
Should Win: Julian Schnabel, The Diving Bell & the Butterfly.
This is a film in which 95% of it’s success is because of the way it was directed. The vision that Schabel had and actually gets onto the screen is simply too impressive for words. This is a must-see film that will leave you speechless upon exiting the theatre.
Should Have Been Nominated: Sean Penn, Into the Wild

And the rest…
Animated Film: Ratatouille

Cinematography: There Will Be Blood

Documentary Feature: No End in Sight Taxi to the Dark Side

Short Film, Animated: I Met the Walrus Peter & the Wolf 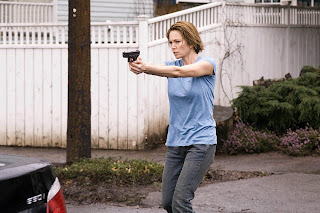 I recently watched the 1970s movie “Network.” That movie was a satire about the television industry that was way ahead of its time. It’s probably one of the least dated movies in that it’s story is just as relevant today as it was back then. It was about a woman (Faye Dunaway) who worked at a TV network who would put anything on the air to get ratings. She’d put on some crazy guy who talked about wanting to commit suicide on live TV and she insists that’s what viewers want to see. In the cyber-thriller “Untraceable” a killer is broadcasting his victims online and the more visitors to his website the quicker the victims die. What is learned in the movie is that there are some sick people out there. But what the movie doesn’t realize is that anyone who sees the film is just as sick as those who would go to the website.

Of course that sounds strange coming from me, the some person who would rather watch “Hostel Part II” than “Citizen Kane.” The problem with Untraceable isn’t that it reveals in showing graphic murders, but it thinks it’s being profound in the process. It thinks it’s saying something about our society. It isn’t really. It’s just as cheap as any teen slasher movie and those movies we know aren’t trying to say a damn thing except: “Look at this bloody breasts!”

Untraceable follows Diane Lane’s character who works in the cyber crimes division of the FBI. She finds guys who send computer viruses and who steal peoples financial information. You know the types. Her partner in crime fighting is none other than Tom Hanks’ son Colin Hanks. He seems rather young to be an FBI guy but imdb.com tells me he’s 30. Geez I wonder if he still gets carded. Anyways, they get inside tip about a website that is being broadcast from the area live. The camera shows a man with cuts on his chest. He’s bleeding. The wounds don’t appear to be too fatal except that he’s slowly being fed a drug that will stop his blood from clotting. The more visitors to this website (killwithme.com which in real life turns out to be the film’s official website) the more drugs released into this guy’s body and the quicker he bleeds to death. He’s dead in less than a day.

The film as a whole is rather predicable and doesn’t really add anything new to the genre, but it’s a decent watch. It has a few genuine thrills up its sleeve and I was never bored by the proceedings. However in a day and age when the Internet can showcase wonderful pieces of entertainment, it surprises me why anyone would want to check out “Untraceable.” GRADE: C+