Yawn of Justice: The Forgettable “Shazam!” is a ‘Big’ Disappointment 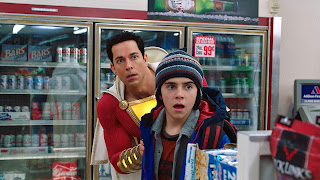 With so many great superhero movies out there (some might say too many, which is probably right) it seems like there’s room for a stinker here and there. And that would be “Shazam!” Which is a serious disappointment because “Shazam!” is unlike many of the other popular comic book films that have overcrowded the marketplace. It goes against type. I get it. It does its own thing. I get it. It’s about “the hero in all of us.” I get it. It just didn’t work for me. And here’s why.

The film lost me at wizard. My brain can’t compute the notion of wizards. They’re a bit too… magical. Now other comic book films have had fantastical elements and while my eyes and brain tend to glaze over when it comes to that fantasy stuff my brain couldn’t take any of it in “Shazam!” The film starts in the 1970s when a kid riding in the back of his dad’s car is strangely transported to a magical place where an ancient wizard is looking for a new chosen one who is pure of heart. Apparently this kid isn’t it. The film then jumps to present day Philadelphia where a troubled foster kid named Billy (Asher Angel) is looking for his birth mother. He’s place in a new group home with several other kids of varying age and race. He befriends another boy in the home named Freddy (Jack Dylan Glazer from “It”) who is disabled and a superhero enthusiast.

For some reason Billy gets zapped to the ancient realm where that wizard is still looking for the chose one. It’s this kid, and so now when he shouts “Shazam!” he turns into a jacked Zachery Levi with superpowers. At first the film’s colorful, playful tone suggests the story will be a take on “Big” but the “body switch” fun is quickly dropped in favor of superhero antics and a tedious plot about the grown up boy from the film’s opening (now played by Mark Strong) who has been obsessed with figuring out why he wasn’t the chosen one. A bunch of demons, all representing the seven deadly sins figure into his evilness and doesn’t make a lick of sense but here we are. Is it over yet?

Trying to figure out what’s the problem here is what’s bugging me. There’s nothing all that technically wrong with the film. It has decent effects but you can tell it’s a lower budged affair than the usual Marvel or DC fare. The film is certainly more of a comedy but none of the humor really works. The fact that most of the main characters are children makes the film feel slightly kiddie and yet the film has some extremely dark elements including a sequence in which the staff an entire office boardroom is brutally murdered. It’s easy to appreciate the generally lighter tone compared to DC and Warner Bros’ previous efforts. “Aquaman” lightened things up considerably and worked even if it functioned in a standard way. It was colorful, fun, and humorous. It never got bogged down in a serious tone set by “Man of Steel.” “Shazam!” takes place in the same world of those films but feels oddly out of place. If you’re bored you can even count the endless references to Batman and Superman.

Boring. That’s a good word to describe “Shazam!” I never got invested in Billy’s quest to find his mother. I didn’t care about his foster siblings or his foster parents. Maybe the film was poorly cast? The writing isn’t all that amazing either with a pretty dull script from Henry Gayden. Director David F. Sandberg who comes from the horror world with solid efforts “Lights Out” and “Annabelle: Creation” under his belt is sort of out of his element. The humor never congeals with the film’s darker elements and the film just doesn’t look glossy and pretty.

There are a few bits here and there that sort of work – there is something fun that happens in the final act – but the film mostly left my dumbfounded. It just doesn’t work. The jokes weren’t funny, the characters were uninteresting, and the effects weren’t all that impressive. Zachary Levi spends most of the movie just mugging for the camera and it’s awkward and silly. There are comedic superhero movies starring young actors that work - “Spider-Man: Homecoming” comes to mind- and there are lower budgeted irreverent superhero movies that work – let’s say “Kick-Ass” - but “Shazam!” breaks the fundamental rule of cinema – it’s forgettable.  GRADE: C-