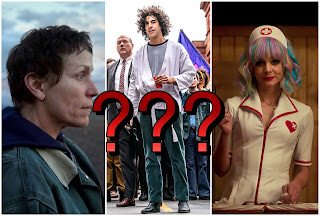 And here we are. It’s finally Oscar weekend. And I still don’t even know who’s gonna win half these awards. It’s been a weird so I expect a lot of unpredictability. As is usually the case the frontrunner is not necessarily the film I enjoy the most. But I am willing Promising Young Woman, a film I’ve watched 6 times since it got released on demand earlier this year, to win everything it’s nominated for. It would sound so nice to say “Winner of Five Academy Awards, Promising Young Woman!” I really just want something utterly crazy and unprecedented to happen. But I also want to be right. Here is what I think will happen in each category. Let’s do this…

Who Will Win: Nomadland.

Should of Been Nominated: Ma Rainy’s Black Bottom.

Ok definitely not one of the definite locks of the night but the most likely winner is Nomadland especially since Chloé Zhao is the frontrunner in Best Director. It still feels weird as the frontrunner considering it feels like a one woman show with many non-actors throughout. Films with small casts or focus on one or two characters rarely win Best Picture. Just look at things like Gravity, La La Land, and even last year’s 1917. Which is why The Trial of the Chicago 7 actually feels like the consensus choice; a big cast, important and historical message, and oddly enough a film dominated by male characters. Even if Aaron Sorkin got snubbed in Director Chicago 7 feels like a film made to win this award. Promising Young Woman meanwhile is a sight possibility and feels like the most buzzy nominee. Every person I know who has seen it loves it. It has such a twisted script, feels timely, and feels extremely original and balances art and entertainment expertly. At the end of the day Nomadland feels like the safe choice but anyting can happen and I’ve gotten this category wrong for the past few years so there ya go. PYW is my favorite of the year which is why I'm rooting for it and means it probably won't win.

Should of Been Nominated: Darius Marder, Sound of Metal.

Zhao winning here feels like one of the sure things of the night since she’s won everything else including the predictive DGA… but didn’t Sam Mendes win everything last year and then lose to Parasite’s Bong Joon Ho? I can’t imagine another upset so soon.

Should of Been Nominated: Elisabeth Moss, The Invisible Man.

Whoa what a race this year! It’s enough to give the biggest Oscar fan some serious heartburn. At the beginning of the season it seemed like Carey Mulligan’s to lose. But then she actually kept losing, except for the Critics Choice. Each actress has won a different precursor award. Viola and Frances have already won (the latter having already won twice) so it feels like Carey should be the frontrunner. But I’m going with SAG winner Davis who feels like a performer who should already have a dozen Oscars.

Should of Been Nominated: Delroy Lindo, Da 5 Bloods.

The late Chadwick Boseman has been winning everything in sight except the BAFTA. But I think he’s got this thing locked down. If anyone can give him a run for the money it’s probably Anthony Hopkins.

Should of Been Nominated: Oliva Cooke, Sound of Metal.

So many questions. Will Glenn finally win? For THAT? Highly unlikely. Could the actress who scandalized Rudy Giuliani actually win? It’s possibly. Anything can happen in this category, right Marcia Gay Harden? But I think Minari’s cute grandma, the film’s heart and source of humor, is most likely to be that film’s major win.

Will Win: Daniel Kaluuya, Judas and the Black Messiah.

Should of Been Nominated: Bo Burnham, Promising Young Woman.

Daniel has been steamrolling all season. But now his co-star LaKeith is also nominated. Will it split his vote? Probably not, but you never know. I love Daniel, but Paul Raci in Sound of Metal truly moved me. But I think his nomination is his reward unfortunately. But I'd be fine with any of these guys winning.

As the Best Picture frontrunner, this will be one of several awards Zhao is expected to take home. Since I'm not a huge fan of Nomadland I'd give to Borat because I want to see a dozen screenwriters try to give a speech.

It’s Trial vs PYW. Woman is the more daring, original script. Trial feels like standard Aaron Sorkin stuff. If Trial has a hope in the world of winning Best Pic it will probably also win here. And if PYW wants a chance to win BP it will probably have to win here as well. I think PYW will take this one in a squeaker. It 's no secret that's what I'm rooting for and of all the nominees it deserves it.

I bet against Pixar last year. That was a mistake.

The pretty little film that could seems like a lock here.

Will Win: My Octopus Teacher.

All of my favorite documentaries from this year weren’t even nominated. Ehh.

This is an important category. If Trial wins, I think it has a good shot at Best Pic. If Sound of Metal wins I think things will play out as I predicted. It used to be rare for a film to win Best Pic and only one other award but Spotlight pulled it off not too long ago. So Trial sort of needs this but doesn’t really. Heck, even The Father could win here.

Will Win: Another Round.

When the director gets into Best Director, that’s a good sign.

It feels like I’m picking Ma Rainey to win so many awards, but does the Academy really like it that much? It didn’t even get into Best Picture. So who knows really. I wouldn’t be shocked to see Hillbilly Elegy or Pinocchio win.

I think Minari could win but Soul’s score is really inventive and it’s about time Atticus Ross and Trent Reznor won again.

Will Win: “Speak Now” One Night in Miami.

Not the greatest category this year so I think they will vote for the one that has won previous awards. It would be cool if “Husavik” won even though I wasn’t a huge fan of that movie.

The tribute to Hollywood of the past won last year so it makes sense that the equally in love with Hollywood Mank would win this year.

Yup there is only one Sound category this year. So no more worrying about these categories splitting. And for this inaugural year I’m betting on the film with “sound” in the title.

What a weird category this year. In what is usually filled with blockbusters you’ve actually heard of, this category is filled with stuff you probably haven’t. Which is why I think Tenet will prevail here because its probably the one people have either seen or at least heard of the most. PSA: Love & Monsters is great!

Will Win: "If Anything Happens I Love You"

Will Win: "A Love Song for Latasha"

I accidentally searched and visited your site. I still saw several posts during my visit, but the text was neat and readable.