Rebel Without a Cause: The Satirical “Isn’t It Romantic” is a Rom-Com With Considerable Bite 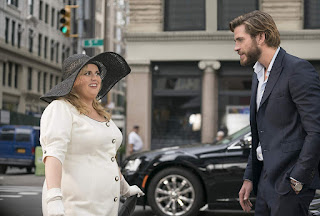 A meta movie like “Isn’t It Romantic” couldn’t exist if there weren’t decades worth of romantic comedy cliches built over time. “Isn’t It Romantic” is a satire of the traditional rom-com that has permeated the American cineplex for years. Of course it’s not the first film to spoof the genre and it certainly won’t be the last. But it does so in a clever enough way – even if it’s all a bit too obvious at times – to make it a rather enjoyable experience.

Aussie funny lady Rebel Wilson stars as a frumpy woman living in a “realistic” version of modern NYC. The film opens with Natalie as a kid watching “Pretty Woman” and her mother insists that movies like that aren’t real life. Anyone with half a brain knows that. Natalie grows up knowing that as well – movies are make believe after all. One day she’s mugged in the subway and knocked unconscious but when she wakes up everything is… different. Her hospital room is as gorgeous as her doctor and New York City no longer smells like garbage. Her apartment is now twice the size and she has an entire walk-in closet filled with every pair of shoe imaginable. Her creepy neighbor Donny (Brandon Scott Jones) is now her flamboyantly gay sidekick, Her nerdy work assistant and friend Whitney (GLOW’s Betty Gilpin) is now bitchy, steely, and her sworn enemy. But one thing remains: she still crushes on her guy friend Josh even though she doesn’t think he’d date her in a million years. Enter the dashing, and second best-looking Hemsworth brother Liam as Blake as a company client who also apparently has a thing for Natalie. It’s not long before Natalie realizes that she’s trapped in some kind of Twilight Zone romantic-comedy dimension where she can’t even drop an F-bomb, even though PG-13 rated films allow at least one.

“Isn’t It Romantic” is directed by Todd Strauss-Schulson and that’s no surprise because his last film was the equally meta “The Final Girls” which featured a reworking of slasher movies. That film didn’t quite work for me in the way that this film does. “Isn’t It Romantic” isn’t perfect though; for all its charm and wit, it hits all the basic notes as found in the script by Erin Cardillo, Dana Fox, and Katie Silberman. It announces all the cliches of the rom-com genre but then just sort of follows them anyway. But that’s sort of the point because ultimately the film does take it’s own turn in the final act which was refreshing. The film is essentially a “best of” rom-com and yet you actually begin to care about Natalie and her plight.

Strauss-Schulson and his cast have such a fun time creating this fantastical world of perfection that it’s hard not to buy into it. The humor is pretty biting and Wilson makes for an absolutely perfect leading lady equally capable of being both sarcastic and charming. Even if the film is heavily influenced by famous rom-coms, I got a heavy “Wizard of Oz” feel. The opening scenes are gritty, filled with washed out colors, and shaky camerawork. After Natalie wakes up the film is brighter, more colorful, and the Steadicam makes itself known.

“Isn’t It Romantic” isn’t without faults but it’s a really fun time and offers plenty of laughs. The premise is rather clever even if it hits most of the beats you’re expecting. The film does feels like it offers universal appeal: Those who love rom-coms will enjoy the rom-comness of it all, and those who find the genre eye-roll inducing will still get a kick out of it. Wilson is matched with perfect material here, she gets to be physically funny and offers plenty of wit herself. Oh, and there are musical numbers. Did I mention the musical numbers?  GRADE: B