Drive Me Crazy: “Uber Ex” is a Funny, Romantic Ride 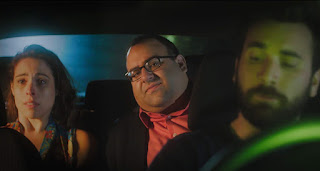 Is there anything more awkward than romance? Prepare for a perfectly awkward ride in “Uber Ex” another wonderful comedy short from director Matt Braunsdorf and his frequent collaborator screenwriter/actor Jonathan Marballi. Their last film, “This is That Night,” was shot in beautiful black and white and featured a blossoming new relationship. “Uber Ex” is another fun play on romantic comedy conventions featuring gorgeous color digital cinematography.

David (Marballi) and Kate (Paige Lindsay Betts), the woman he’s dating, are about to take a wild ride. He orders an Uber and what should be an uneventful ride home after attending an engagement party turns into something he wasn’t quite expecting. You see, the Uber driver is coincidentally Kate’s ex-boyfriend Lev (Jeremy Michaels) and the three adults find themselves in a delightfully uncomfortable pickle.

First of all, in every romantic comedy the leads must have chemistry and Marballi and Betts are fantastic together. Betts has something fresh and funny about her as if she could easily fit into the wild antics of Abbi and Ilana from Comedy Central’s “Broad City.” Marballi is a wonderful leading man and has all the perfect facial expressions as Kate and Lev slowly begin to rekindle their failed relationship right before his eyes. This is funny stuff.

Braunsdorf has accomplished a lot with a 16 minute short about three people riding in a car. The production value is pretty impressive for a small indie film. Andy Bond’s cinematography is scrumptious; the lighting is bright and colorful. Jared Dymbort’s original music is fun. The film even features original songs by Michaels. Marballi’s script is light and breezy and funny and real. The actors are all in top form; especially the charming Marballi whose reactions are pretty priceless during his hellish car ride home. After watching the bitterly sweet “Uber Ex” you’ll want to fall in love all over again, or at least crave a really good omelet.  GRADE: A-