Toy Gory: The “Child’s Play” Redo Proves to Be a Fun and Nasty Treat 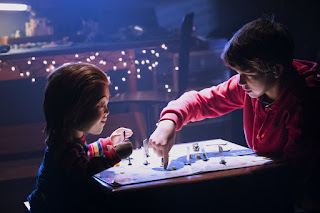 The original “Child’s Play” from 1988 is a silly movie no doubt about it. In it, a serial killer passes his soul onto a doll as he lays dying. The doll ends up in the hands of a young boy, who insists his doll is actually alive and committing crimes – like murder. The film was a hit because a) dolls are creepy and b) ones that are alive are even creepier. A horror franchise was born as was a new boogeyman. But still, it was about a killer doll. At once a social commentary on the Cabbage Patch doll craze of the early 1980s and general commercialism, the original “Child’s Play” offered a silly premise that’s easy to buy into. The same can easily be said for its remake which satirizes our society’s obsession with the Internet of Things. Somehow, a killer Amazon Echo isn’t that visually interesting so a redesigned Chucky doll complete with WiFi and modern technology fits the bill. This time Chucky isn’t possessed by a killer, he’s a self-aware smart device that can learn and has no qualms about graphic violence. The doll becomes overly attached to his tween owner Andy so what we basically get is a weird horror hybrid of “Small Soldiers” and “Single White Female.” And I didn’t hate it.

A disgruntled employee in a toy factory in Vietnam is to blame for the events of the new “Child’s Play.” Buddi is an immensely popular line of high-tech smart dolls that can connect to various other devices made by a tech company called Kasdan. The guy disables one doll’s safety measures and other things that essentially make the toy capable of turning into a murderous psychopath. Chucky doesn’t have the actual personality of a real person which feels odd since that’s such a staple of the franchise (mostly due to Brad Dourif’s fantastically maniacal voice-work). For the first time Chucky is voiced - equally well - by Mark Hamill. Andy is portrayed as an older kid (Gabriel Bateman) who’s unique trait is that he has a hearing aid. His mom Karen is much less sympathetic in this version but Aubrey Plaza is fine in the role as a working class mom.

Karen works at a discount department store much like Walmart and is able to sneak home a slightly used Buddi doll for Andy, who isn’t initially all that impressed. But Andy and his mom are new to the area and he’s desperate for companionship – especially since Karen is dating an obnoxious loser who we can’t wait to see get killed. After the doll “imprints” on Andy – sort of like we see in Steven Spielberg’s “AI” – the kid takes a liking to his Buddi doll who can record audio, video, and connect to his phone, etc. After Chucky watches some “Texas Chainsaw Massacre Part 2” with Andy and his new [human] friends, the doll begins to see violence as something to laugh about. This is sort of where the fright factor of this new film begins to lose me. The fact that Chucky, even as a smart device, doesn’t actually know any better makes him instantly less scary. That isn’t to say the violent acts he does eventually commit aren’t fun to watch. Director Lars Klevberg certainly has a mean streak as he stages the death scenes with a sense of dread and grotesqueness.

The people Chucky goes after have wronged Andy in some way which makes the film feel a like a modern take on the psycho stalker thrillers of the early 90s. This is basically “Single White Female” with a robot doll. And I’ll take it. Tyler Burton Smith’s script is certainly wacky and the pacing and tone are a bit all over the place – at one point the movie strives to be like “It” with [less memorable] kids banding together to try and take down the monster but the idea is sort of lost and doesn’t really go anywhere. There’s even an entire sequence involving a severed head that’s been wrapped as a present that’s played entirely for laughs. The film is slick-looking and has decent practical effects, even if the Chucky doll design is pretty horrendous. And it’s not because it looks like a shell of the original design – it’s just an ugly freaking doll which makes it hard to believe people in this film would be obsessed with it. The last positive thing I’ll say is that composer Bear McCreary’s original score is completely dope as is an original song that will become an earworm if you let it.

In the end, this new “Child’s Play” sort of won me over. It’s not earth-shattering by any means but it’s not nearly as terrible as we all assumed it would be. The film is slick, nasty, and fun; and just as ridiculous as its 1988 counterpart. Does it need to exist? Not really. Especially since original screenwriter Don Mancini is still knees deep into continuing the original franchise. But those movies have taken some odd directions and it was about time someone steered the ship back into something more palatable.  GRADE: B