It's that time of year again. On Monday January 13th the Academy of Motion Picture Arts and Sciences will announce their nominees for the 92nd annual Academy Awards. Since this is my version of football season, I sort of take this stuff seriously, so without further ado I present my 87% fearless Oscar nomination predictions. On with the show...

Best Picture
It’s a pretty strong year for film and I wouldn’t be surprised to see as many as 9 nominees (for the record, there has never been a list of 10 nominees since the Academy changed its rules to allow for between 5-10 nominees). I think the first 7 on here are basically locks. I’d be shocked to see one of them miss. Beyond that it’s really a guessing game. I think Ford v Ferrari has a really solid shot as does Little Women. The Farewell is a little tiny movie and films like that tend to break through when they have a small but passionate fan base. Plus, the Academy’s membership is more diverse and international than ever before. (But still predominately white and male). What are the other possibilities you ask? The Two Popes, Knives Out, Bombshell… I wouldn’t be TOO surprised to see any of those make it in. In the last few years there haven’t been any absolute shock nominees in this category. It’s just must harder to predict the actual winner…

Here are my projected nominees in order of likelihood of being nominated:
“The Irishman”
“Once Upon a Time in Hollywood”
“Parasite”
“1917”
“Marriage Story”
“Jojo Rabbit”
“Joker”
“Ford v Ferrari”
“Little Women”
“The Farewell”
alternates – Knives Out, The Two Popes, Bombshell

Best Director
People have been underestimating Taika Waititi for far too long. He recently got in at the DGA, and I’m all like, duh. I’ve been saying for the longest time: since Jojo Rabbit won the coveted Audience prize at TIFF, it would surprise everyone and probably win Best Picture. It’s about WWII, is heartfelt, is relevant to today, and has a strong ensemble cast. If that doesn’t scream best picture I don’t know what does. So I think Waititi will sneak in here… if he doesn’t that fifth slot could easily go to Noah Baumbach, Greta Gerwig, or Todd Phillips. My predicted five is the same lineup as DGA which rarely is a perfect match so one is bound to get bumped.

Best Actor
I also don’t know why people have been underestimating Rocketman’s Taron Egerton. If Rami Malek could WIN there’s not way Taron couldn’t get nominated. His SAG nomination and Globe win has sealed the deal as far as I’m concerned. Robert DeNiro seemed like a lock as soon as The Irishman hit Netflix but he hasn’t showed up in any of the precursor awards except for the Critics Choice Awards (where they have 7 nominees). Another possibility is Adam Sandler in Uncut Gems; he’s very good but I’ll believe it when I see it.

Best Actress
I’m still in deep denial that Lupita Nyong’o - like last year’s Toni Collette - is not quite the frontrunner most thought she would be. However, I actually think she has a pretty decent shot. If she doesn’t get in, she was definitely 6th. I also think the Academy’s push for more diversity certainly helps her cause. I could see her slot or Cynthia Erivo’s slot going to Awkwafina which would also be another deserving and diverse choice. Saoirse Ronan could easily land in here as well, but I feel like Little Women in general hasn’t made much of a big splash this award season. I’m pretty sure Renee and Scarlett are locks however.

Best Supporting Actor
It feels like anything can happen in the supporting category and I feel like there could be a fun surprise or two. The only one who feels like a total lock is Brad Pitt and everyone else sort of feel like placeholders. Tom Hanks is not knew to the shocking snub, see “Saving Mr. Banks” and “Captain Phillips.” Can you believe that Tom Hanks hasn’t been nominated since 2000’s “Cast Away”?? Having said that I’d be a little surprised to see him not show up here, along with two other Oscar winning veterans, Al Pacino and Joe Pesci who both haven’t been nominated since winning their Oscars in the early 90s. The fifth slot is tricky. Could it go to another veteran like Anthony Hopkins or a newbie? I’ve been holding out for a long time for Willem Dafoe in “The Lighthouse” but his lack of precursor nominations is telling. Besides is “The Lighthouse” the type of movie that the Academy is even watching? So I’m gonna go with Song Kang Ho in “Parasite” a film that everyone is seeing and it feels like it has to get an acting nomination somewhere.


Best Supporting Actress
Like I said, there are always surprising in these supporting categories and I wonder if I can sense a snub coming? Jennifer Lopez has long be a frontrunner for her charismatic work in Hustlers but I wonder if the subject matter will work against her. She wasn’t nominated at BAFTA which worries me. Having said that, she’s still a pretty strong contender, as is frontrunner to win Laura Dern. Scarlett looks to earn double bids, though she’s less likely to show up here. I think Zhao Shuzhen and Margot Robbie are pretty likely. When it comes to Robbie which film will she even be nominated for? Many predicted her small part in “Once Upon a Time in Hollywood” would nab her a nom but then Bombshell came along. I almost wonder if she could end up canceling herself out. The BAFTAs nominated her TWICE but that’s against the Academy’s rules. Florence Pugh could get in but got left out at SAG. Also, never underestimate Academy alumni Annette Bening (The Report) or Kathy Bates (Richard Jewell).

Best Adapted Screenplay
I’m pretty confident with 4 of these picks. The fifth slot is a race between two films about two men having conversations: “A Beautiful Day in the Neighborhood” and “The Two Popes.” Flip a coin really. Besides these 6 I’d be kinda surprised to see anything else make it in. This has definitely been a stronger year for original screenplays.

Best Original Screenplay
There’s usually a really witty funny comedy in this category, but I think this year the more prestigious and serious movies will bump out the more “fun” ones. In any other year Knives Out and Booksmart would be shoo-ins here, but foreign language movies do surpringsly well in the screenplay categories. Rian Johnson has been snubbed before, hello Looper, but maybe the Academy will accept his clever murder mystery. If it misses here on nomination morning, don’t expect it in Best Picture.

Best Animated Feature
I’m preparing for a major snub in this category since it happens every year. The funny thing is I could really care less about this category this year. I haven’t even seen any of the potential nominees. Well I saw half of Toy Story 4. Is the Academy really going to nominate three sequels? We shall see.

Best Cinematography
I feel like The Lighthouse has to get in here. But I’ve been racking my brain trying to figure out who to kick out. I don’t know if “The Irishman” is as visually dazzling as some of Martin Scrosese’s other recent works and I’d be surprised to see many of the potential nominees left out. Ford v Ferrari doesn’t feel like a lock, but I think the degree of difficulty in those racing scenes will push it through. A snub for DP legends Roger Deakins or Robert Richardson would be criminal. I could also see Parasite pushing another frontrunner out, but who??

Best Makeup and Hairstyling
“Bombshell”
“Joker”
“Judy”
“Once Upon a Time in Hollywood”
“Rocketman”
alternates - “Dolemite Is My Name””Maleficent: Mistress of Evil” 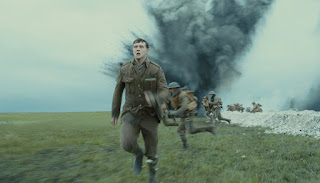 Another award season, another war film. If you ever wanted to see what would happen if "Birdman" and "Dunkirk" had a baby then say hello to "1917." It's a fantastic piece of cinema that follows two World War I soldiers as they're tasked with manually delivering a note to another battalion to call off the next morning's attack. If they don't get there in time thousands of soldiers will die, including of the solider's brothers. A really simple setup for sure - we don't really get to learn anything about WWI; that's not the point - but Sam Mendes' film is an orgy of painstaking choreography behind and in front of the camera. The film is presented as if the whole thing was shot in one continuous take. Suspense abounds as the film presents time as the enemy which makes the experience, at times, practically panic attack inducing. By having the film play out in real time it makes the situation all the more dire and is really impressively staged by cinematic wonder DP Roger Deakins and features fantastic production design, another winning Thomas Newman score, and charismatic performances from the two leads George MacKay and Dean-Charles Chapman. The film really is a technical wonder and more than just a cinematic trickery. These types of movies coming out of Hollywood studios are few an far between and is this one is certainly a sight to behold. GRADE: A
Posted by Chris at 3:51 PM 3 comments: