This is “Us:” Jordan Peele’s Bonkers New Nightmare is an Instant Horror Classic 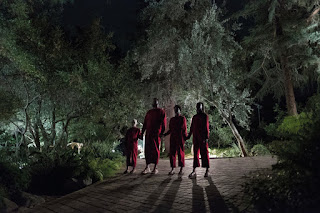 One this is most definitely true of Jordan Peele’s “Us:” it demands that you see it a second time. And I’m ok with that because it’s completely outstanding; it’s creepy, scary, intense, funny, and, best of all, flat-out insane. The preview for “Us” tells us all we need to know to get us to want to see this bizarre new follow up to his Oscar-winning hit “Get Out:” a family on vacation in their summer home begin to be terrorized by another family who look exactly like them. Sold. And yet there is so much more to “Us” as a film that I almost feel like I underpaid for the fantastic experience of it all. The film is a smart and funny horror flick that has a much bigger scope, fun twists and turns, perfect performances, and has a lot to say about society once you begin to discuss the film afterwards. In fact, I just can’t stop thinking about it. Jordan Peele is a genius.

The film is a reunion of sorts for “Black Panther” supporting actors Lupita Nyong’o and Winston Duke who play the Tylers, a middle class couple who set out to their vacation lake house with their two kids. We learn through flashbacks that Adaelaide (Nyong’o), as a child, had a traumatic experience in a carnival fun house. She seems to generally gotten over it though she’s a bit overprotective of her daughter Zora (Shahadi Wright Joseph) and especially her younger son Jason (Evan Alex). Her husband Gabe (Duke) is your typical goofy, funny dad who likes to tease and slightly embarrass his kids. Seems like a normal family to me. But all is not what it appears to be on this supposed idyllic summer vacation. There’s definitely something wrong. And later that night a family of four shows up in the driveway – all wearing red jumpsuits and clutching menacing golden scissors – who seem to want one thing: to get in their house. Oh and they literally look just like them (they’re even played by the same actors).

It would criminal to say much more as the fun of it all is determined by how little you actually know going into the film. Peele has crafted a really fun and scary film that’s part home invasion thriller and part – well he mixes lots of genres and inspirations. Essentially a full length bonkers “Twilight Zone” episode, “Get Out” was a modern take on “The Stepford Wives” and “Invasion of the Body Snatchers” but “Us” doesn’t feel quite as definitive. I felt the influences of lots of films. Everything from “Funny Games” to “Jaws” to “The Birds” and “The People Under the Stairs.” Throw in a bit of zombie movie, David Lynch, Alfred Hitchcock, and - once again - a “Twilight Zone” and you get somewhat of what to expect in “Us.” Peele always has a message – his choices in his script and direction are never just coincidence. It was obvious what he had to say in “Get Out.” But with “Us” it’s slightly more challenging and vague and open to interpretation (and, for the record, arguably much scarier). In fact “Us” isn’t just the simple home invasion film that the trailer sets up – this movie will facilitate a post-viewing discussion that could take weeks to unravel. I can’t remember a mainstream film doing that since the controversial “mother!” but that film was far less digestible.

Peele is a master filmmaker, even at only two feature films into his career. His movie is so well crafted you’d think it was a veteran filmmaker 30 years into his career. Technical merits are solid. The film’s visuals are beautiful and telling – an overheard shot of the family as they make their way across the sandy beach with the sunlight casting large black shadows is one of the most seemingly innocuous but menacing shots of foreshadowing in quite some time. The music score from composer Michael Abels is just as menacing and simply outstanding. The film’s third act is simply bonkers and a complete showcase for the wonderful and Oscar-worthy Nyong’o who kills it in two terrific performances. Also great in a supporting role is Mad Men’s Elisabeth Moss as the Tyler’s friend also on vacation with her family

Do me a favor? Go see the film, laugh and scream, and then talk about with those you saw it with. Talk to the woman sitting in front of you who seems confused. Facilitate discussion. I don’t think there’s exactly a wrong or right way to interpret Peele’s film. He has a lot to say about class, race, and American society in general. The movie’s trailer insists we are our own worst enemy and I think that’s a great jumping off point. God I can’t wait to see this again.  GRADE: A