Out of Africa: The Thrilling “Black Panther” is Just the Movie We Need Right Now 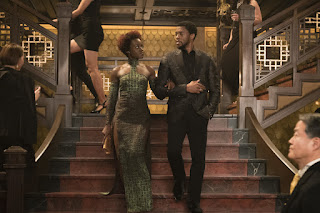 I tend to be a bit hesitant when it comes to some of the lesser known Marvel characters. But in reality these lower tiered folks turn out to be just what audiences deserve. A slight break from the routine. And “Black Panther” is just that film. A blockbuster in every sense of the word, this fantastical action adventure pushes the boundary of big budget movie making in really fun and creative ways. And the fact a film that pushes for diversity and representation is coming out now shows that even if Hollywood is sometimes behind on the times its good to know they’re at least taking the right steps. “Black Panther” shows Marvel at the full height of creative prowess by giving us a diverse cast of fascinating characters with real motivations and superior production quality from a director in full creative command. A fun conglomerate of various genres from Shakespeare melodrama to spy thriller to fantasy, the film works on multiple levels and hardly requires any previous knowledge of the seventeen (!) other Marvel films that have come before it. In other words, even after ten years of Marvel Studios films, these people still know how to make a darned good piece of popular entertainment.

Ryan Coogler. How does a filmmaker go from such small, indie roots as “Fruitvale Station” which first got both him and breakout star Michael B. Jordan noticed, to the 18th film in the Marvel Cinematic Universe? It’s because the studio is willing to take a chance. But don’t forget that Coogler proved he could play with a bigger budget with the tremendously well-received “Rocky” spin-off “Creed.” His impressive cinematic eye was impossible to ignore. The director brings a much-needed fresh perspective to the MCU as the big budget comic book films are dying for a little bit of diversity. And diversity is just what audiences crave. Just look at last year’s fantastic female-driven “Wonder Woman.” It’s step in the right direction that is sure to attract new talent and a new audience as well. Sure “Black Panther” is diverse, with a predominately Black cast of well-known and little-known actors. And they are all glorious.

We were first introduced to T’Challa (Chadwick Boseman) in “Captain America: Civil War” where we see his father fall victim to a terror attack. T’Challa becomes the king of the fictional African country Wakanda. Wakanda is a special place; it posses as a third world country but is actually the home to powerful, advanced technology in form of “vibranium.” T’Challa is not only king but possessed the power of the “Black Panther;” a guardian for Wakanda. Of course it isn’t so simple. Enter some complicated family dynamics and you’ve got yourself a fantastical African-set Shakespearean drama that is truly absorbing. Meanwhile there are car chases, fight scenes, and flying ships that will likely make “Star Wars” fans salivate on cue.

What’s so particularly special about “Black Panther” is how well the film balances a handful of different genres and how smoothly it transitions from comedy to serious drama. And it works as an all-too familiar reflection of our troubled times. T’Challa insists on protecting the people of Wakanda from outside forces but in so doing he’s leaving other decedents of the African continent to live in poverty stricken communities. Coogler’s protege Jordan plays N’Jadaka a former US soldier who seeks to use vibranium in a malicious way and is intent on overthrowing T’Challa and make Wakanda his kingdom. Notes of “The Lion King” don’t exactly go unnoticed, but let’s not forget that that animated classic is really just a retelling of “Hamlet.” The dynamic between T’Challa and N’Jadaka are not unlike historic real life civil rights activists Martin Luther King Jr. and Malcolm X who each had radically different ideologies for essentially same cause. Coogler and co-writer Joe Robert Cole’s script is well aware of the time and place this film is existing in. The fact that Cole also wrote for Emmy-winning miniseries “The People vs. OJ Simpson” is not coincidental.

Sure it’s a super hero film with a message. But it’s also wildly engaging and supremely entertaining. T’Challa’s younger sister Shuri (Letitia Wright in a scene-stealing performance) is essentially the Q of Wakanda with all her fascinating vibranium-forged gadgets. The film features an awesome car chase that rivals anything seen in a James Bond film. The costume design and set design is exquisite and colorful. And the music score from Swedish composer Ludwig Goransson is simply beautiful with its African-inspired cues. The performances are truly great from an impressive ensemble cast (with Angela Bassett, Forest Whitaker, Get Out’s Daniel Kaluuya, 12 Years a Slave’s Lupita Nyong’o, The Walking Dead’s Danai Gurira, Andy Serkis, and Martin Freeman all in memorable roles), the direction is suburb, and it truly feels like none of the other 17 MCU movies that have come before it. “Black Panther” is ground-breaking art disguised as popcorn entertainment and it is certain to push the boundaries of the comic book genre forward in exciting new ways.  GRADE: A

Worried of being deceived when you Buy YouTube Views? Here, we assist you doing so. buy youtube subscriber