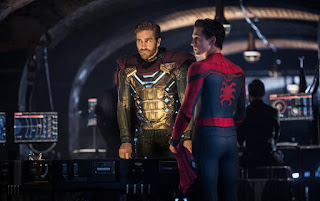 “Spider-Man: Far From Home” is two movies in one. It's a sequel to “Spider-Man: Homecoming,” which was Spider-Man's first solo outing within the MCU. But it also functions as a sequel to “Avengers: Endgame.” And this is where it really shines. The film must deal with the borderline traumatic events that unfolded in the biggest and most consequential film in the MCU universe so far. Sure, coming off the heels of “Endgame” is a lot of heavy lifting, but the film and its makers are up for the challenge and they succeed admirably. "Spider-Man: Far From Home" is a funny and action-packed spectacle that also happens to be a fun trip around Europe. Offering a really fantastic sense of humor, a lot of heart, and charismatic performances from its stars, “Far From Home” is easily one of the best Spider-Man films of all time.


Perfectly timed for Independence Day in the United States, “Spider-Man: Far From Home” spends its time abroad and I can’t think of anything more opportune then getting out of this place. We learn a little more about life after the reverse snap, now referred to as “The Blip,” and how those who were erased from existence have not aged while five years has passed for everyone else. Peter Parker (Tom Holland) is still reeling from the death of Tony Stark but it’s time for a school trip to Europe. And what could possibly go wrong? While there, these monsters that take the shape of the elements (ie, water, fire) begin wrecking havoc and a mysterious caped crusader shows up to stop the terror. This guy is dubbed by the Italian press as “Mysterio.” Oh look it’s Jake Gyllanhaal! Welcome to the MCU Jake. Nick Fury (Samuel L. Jackson) and Agent Maria Hill (Cobie Smulders) want to welcome this new hero to the world – as he’s actually from another of many multiverses, of which his version of Earth was destroyed. Though there’s something rotten in the state of Denmark, we’ll soon find out (and it's not their cheese).

“Spider-Man: Far From Home” continues the teen flick fun of “Homecoming” by focusing on a small group of Parker’s classmates thanks to Chris McKenna and Erik Sommers’ witty script. This includes his best friend Ned (Jacob Batalon) and his new girlfriend Betty Brant (Angourie Rice) who spend their entire European vacation being that annoying couple with matching outfits and terms of endearment. And then there’s MJ (Zendaya) who Peter longs for and she may even have some feelings in return. All of the teen drama is set against this increasing global threat and has Peter in a pickle… I mean where’s Iron Man when you need him. Luckily, Tony Stark’s loyal assistant Happy (Jon Faverau) is there as a sort of reluctant mentor to Peter and their scenes are extremely touching and effective. Not to mention a possible romance with Peter’s Aunt May (Maris Tomei).

This latest entry in the Marvel Cinematic Universe is another pop art comic masterpiece. It’s truly amazing how much sheer fun the film is and how emotional invested one can get in a film series that has been going strong for over ten years. Jon Watts’ film is a visual treat with fantastic action set pieces, a great score from Michael Giacchino, and solid performances from everyone involved. No one really knows where the MCU is going from this point, but it’ll be hard to top everything up to this point. I can’t wait.  GRADE: A