The Bitch is Back: The Visually Stunning “Rocketman” Soars 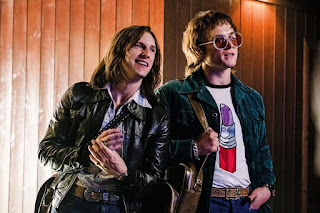 “Rocketman” seems to be a bit of an anomaly in the music biopic movie genre. While the movie’s story follows the same beats of most movies in these genre from the recent “Bohemian Rhapsody” to “The Doors” to “Walk the Line” and “Ray,” “Rocketman” flips things around by turning the story of Elton John into a flashy musical in which characters break out into songs. Think “Across the Universe” if it was actually about The Beatles. The film features an uncannily good performance from its young star Taron Egerton who embodies the soul of Elton John (and even does his own singing). “Rocketman” has spectacular musical sequences even if it’s framed in a been-there-done that story of the price and dangers of fame and dealing with family members who don’t believe in you. But its message of tolerance and acceptance in a world that seems to be moving backwards and not forward is inspiring welcoming, and uplifting.

“Rocketman” begins where most music biopics end, the lead character winding up in rehab. Through flashbacks Elton John (Egerton) tell the story of his life. As a kid (born as Reggie Dwight) he was a young musical prodigy who had a natural talent for playing the piano. And no surprise his parents are assholes. His mother is played coldly by Bryce Dallas Howard and like most characters she plays you just wanna slap her across the face. But I digress. The childhood sequences in most films like this tend to be dull and boring. WE get it he or she was a musical genius at age 10. But at least this time we get flashy musical numbers set to the songs from the musician the movie is about. Who doesn’t love a musical sequence set on a suburban street with the song “The Bitch is Back?”

From there the film follows Reggie as he joins a band, begins collaborating on songs with a songwriter named Bernie Taupin (Jamie Bell), changes his name to Elton John, and discovers that he’s attracted to men. One of the film’s strongest elements is the lifelong friendship that forms between Elton and Bernie. Bernie accepts Elton’s homosexuality and they make beautiful music together. Eventually Elton begins a physical relationship with his manager John Reid (Richard Madden). The film is frank in its depiction of their relationship which is certainly new territory for a big budget music biopic released by a major studio. Of course, “Bohemian Rhapsody” did mostly the same stuff last year but was unfortunately much maligned.

Speaking of which, “Rocketman” is helmed by director Dexter Fletcher who helped steer “Bohemian Rhapsody’s” successful post-production process (which led to 4 Oscar wins) and certainly does wonders here too. On paper “Rocketman” is really a snooze of a script in regards to the story but screenwriter Lee Hall and Fletcher take something that’s rote and cliched and turn everything upside down by making it a flashy musical. The musical sequences are fantastic and make the film come alive. The music is really what makes you care about everything that’s going on in the film.

“Rocketman” feels like a really well done Broadway-to-film adaptation. There’s nothing particuarly groundbreaking or shocking about Elton John’s life as far as music biopics are concerned but Egerton is a revelation and uncanny as Elton, the musical sequences are exceptionally fun and high energy, and the film’s progressive messages will hopefully not fall on deaf ears. Fans of Elton’s music or musicals in general will certainly be in gay heaven and anyone else who stumbles into the theater by accident.  GRADE: A-