The Marvelous Ms. Danvers: “Captain Marvel” is a Solid and Overdue Addition to the MCU 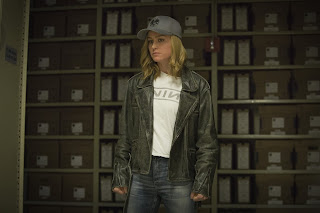 There’s been plenty of great female characters in the twenty Marvel films that have preceded “Captain Marvel.” But none of them have headlined their own film. There’s no reason twenty films in, there has not been a Marvel film centered around a female protagonist. Why is this such a big deal? Well it wouldn’t be if they had made a female centered superhero film years ago. Audiences have waited a long time for Captain Marvel to show up and she’s in glorious form. “Captain Marvel” is definitely one of the most flat-out fun films in the MCU; sure it may not carry the emotional weight of the years preceding “Infinity War” but it stands fine on its own two feet, featuring fantastic visuals, an interesting story, a fun nostalgia streak, and likable characters. This is definitely solid mid-tier Marvel. And it even features one of cinema’s cutest cats.

“Captain Marvel” is sort of “Guardians of the Galaxy” lite. The film is set in the same general universe as that film and even has some crossover characters and races of people. We’re introduced to Brie Larson’s character as Vers who is a Kree and suffers from weird visions that feature Annette Bening. Who wouldn’t want to have weird visions of Annette Bening?? After a mission involving infiltrating the evil shape-shifting Krulls goes awry Vers crash lands on Earth. In Los Angeles. In a Blockbuster. Did I mention the film takes place in 1995? There she meets young versions of SHIELD agents Samuel L. Jackon’s Nicky Fury and Clark Gregg’s Phil Coulson. There, she must help fight off some invading Skrulls and figure out what’s the deal with her bizarre memories and the fact that she may in fact be a former US Air Force pilot named Carol Danvers.

The film could have easily gone down the “fish out of water” plot hole but that was done in “Thor” and even DC’s “Wonder Woman.” The film instead centers around a mystery involving our fantastic lead with welcomed bits of comedy. Directors Anna Boden and Ryan Fleck – who come from the indie world of films like “Half Nelson” – imbue the film with a wonderful intimacy and also 90s nostalgia much in the way “Guardians” was an ode to the 80s. Conceiving the film as a prequel to the other Marvel films also gives the filmmakers the freedom to do their own thing while also eventually connecting the film to the rest of the MCU, much in the same way “Captain America: The First Avenger” was essentially all a setup for “The Avengers.”

Technical merits are top-notch. The visual effects are fantastic. The music score from composer Pinar Toprak is solid if not particularly memorable like most of the Marvel films (she’s also the first female composer in the MCU). Nothing has really come close to the “Ant-Man” theme and Black Panther’s Oscar-winning music. All of the performances are great. Brie is likable in the title role and she really kicks ass even if her performance is a tad understated. Her mysterious story works pretty well and thankfully doesn’t need to include a love interest. Jude Law is good as Vers’ commander/mentor, even if he does too much mansplaning. And how fun is it to see someone like Bening in this? At this point it feels like if you haven’t done a Marvel film are you really even an actor? I previously mentioned the film introduces a cute kitty and that darned cat pretty much steals the movie.

There’s not much to complain about in “Captain Marvel.” Maybe it a take a little time to really get going but the film is just as exciting, the action is just as well-done (including a great sequence on an elevated train), and the characters as just as well drawn as any other solid Marvel film. Is it the best? Of course not. The film isn’t nearly as unique at some of the other entries but Marvel’s overdue take on a feminist storyline is quite good and I can’t wait to see what Brie has up her sleeve in the next Avengers film.  GRADE: B+