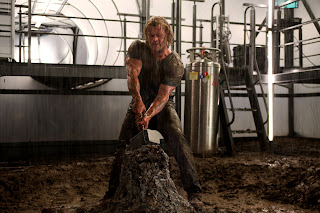 I’m not going to lie, all I know about Thor is what I’ve gleaned from the movie “Adventures in Babysitting.” That would be facts which include him having a special helmet, a hammer, a cape and that he lives in the city (downtown Chicago apparently). I do also know that he’s some sort of God with mighty powers, which sort of makes the movie “Thor” seems like a stranger cross between “Superman” and “Clash of the Titans.” While Thor is not an alien he is certainly from a world other than Earth. But he can fly and kill bad guys like a super man indeed with his trusty hammer. In all honestly this magical world of Thor went a little over my head. There were too many words and names I just didn’t understand which is why the film’s best scenes take place right here on Earth.

To put things simply, Thor (Chris Hemsworth) is banished to Earth by his father King Odin (Anthony Hopkins) because he’s too cocky. Thor inadvertently reignited a years long war between their enemy people known as the Frost Giants. After his banishmen Odin becomes ill so Thor’s brother Loki (Tom Hiddleston) takes over. And it turns out Loki, unbeknownst to him, is actually adopted, but here’s the real kicker: he’s a Frost Giant!

Meanwhile, more interesting things are happening on Earth in New Mexico. Natalie Portman, fresh off her Oscar win plays a scientist named Jane Foster. Her and her assistant Darcy (Kat Dennings) and her mentor Erik (Stellan Skarsgard) witness some kind of weird storm, a tornado if you will. This strange, buff dude shows up (Jane accidently hits him with her van) and they take him to the hospital. It seems as though Thor has been exiled without any of his powers. His magical hammer has been banished too some 50 miles away and only once Thor learns how to be a true gentleman warrior will he regain his powers.

There is plenty of welcomed humor in these scenes. It dares to ask the question: what would it be like if some kind of God from another realm were to crash on Earth. Thor means well but he doesn’t adjust very quickly to the way humans act, especially in public. He gulps down some coffee in a diner and smashes the mug and quickly demands another drink. His three new human friends look at him with confusion and fascination. Jane knows he’s from some place not of this realm and she wants to use her scientific knowledge to open herself up to a world she could only possible know about this chance encounter. It’s too bad the feds confiscate Jane’s equipment and data as these strange happens are being “covered up” and we begin to learn things that will set in motion events that will eventually take place in the upcoming “Avengers” movie spinoff.

As strange as it sounds, Kenneth Branagh, the British actor you may recall has made plenty of Shakespearean films, helmed this project and he certainly lends a wonderful hand. He’s in pretty good control here and he certainly hasn’t met a canted angle he didn’t like. The scenes of the magical God realm is filled with elaborate Shakespearean costumes and set design and almost feels like some kind of weird futuristic setting for Hamlet. These scenes should be silly but somehow work onscreen as confusing as some of the story elements might be. I personally enjoyed the Earth scenes and Thor’s comic interactions with the lowly, powerless humans. The performances are good and there’s really hardly anything to complain about here.

It may not be my favorite comic book movie by a long mile, but Thor does have some impressive qualities. The action sort of flies by and there are some pretty genuinely wonderful moments. Chris Hemsworth doesn’t get to have the same range of character and emotion as say Robert Downey Jr as Tony Stark in “Iron Man” but that’s the way Thor is written. I’m sure comic fans will be pleased and Adventures in Babysitting fans will finally get to see what’s so great about Thor in the first place. “Oh Thor, Mighty God of Thunder” *Clink* GRADE: B