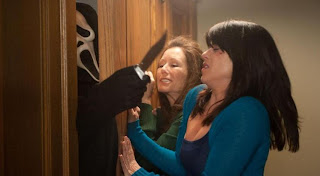 “Who are you, Michael f*cking Myers?”

Oh boy, where do I even begin? I know the Scream films like the back of my hand. They are one of my personal all-time favorite series of movies ever. They exist on an entirely different plane. If you need an actual stuffy critical review please feel free to read Roger Ebert or Peter Travers’ reviews. As a huge horror buff “Scream 4” is everything you could hope and want in a “Scream” movie. It has the characters you’ve loved since the beginnings, new ones who fit into the Scream world, lots of witty humor and enough blood to make a Red Cross blood mobile jealous. Wes Craven who again steps into the director’s chair quickly makes us forget that “My Soul to Take” even happened and resurrects Ghostface in a way that fits easily along the other films and takes this story into the 21st century with glee and terror.

“Scream 4” is probably most like the original Scream. It takes us back to the small town of Woodsboro where it is the 15th anniversary of the original “Woodsboro Murders.” Our loving and tough heroine Sidney Prescott (Neve Campbell) returns to town with her publicist for a book tour to promote her new book “Out of Darkness.” Of course she probably wouldn’t have returned if she knew that two young girls had just been brutally murdered the night before by someone dressed up as our old friend “Ghostface.” Now a new murder spree has begun and we’re all left wondering: first, why would anyone still want to live in Woodsboro and who is doing these new killings? Also, since it’s been ten years since the events of the third outing, there have been several other Stab sequels released. As you know the Stab films are the films within the film that are based on the murders we have seen in the Scream films. It seems as though the new killer, or killers, are Stab fans and insist on copycatting the murders from the films.

A couple other well loved characters make return appearances. Gale Weathers (Courtney Cox) who is now married to Dewey (David Arquette), who is no longer deputy but Sheriff, has sort of retired from journalism. She’s sacrificed her career to be Dewey’s stay at home wife, but she wants to reinvent herself. And solving these new murders just might give her the inspiration she needs. She’s as bitchy and biting as ever and at one point exclaims, “I’ve still got it!” Sidney is staying with her Aunt Kate (Mary McDonnell) and her cousin Jill (Emma Roberts) but Sidney’s sheer presence might put her family and their friends in great jeopardy. Soon Emma and her high school friends are targeted by Ghostface who is the sickest killer since the first film. He quickly stabs to death and guts Jill’s friend and neighbor Oliva (Marielle Jaffe) while Jill and her fiend horror savvy friend Kirby (Hayden Panettiere) watch helpless from a window. Jill is also feuding with her suspicious ex-boyfriend Trevor (Nico Tortorella) who we sort of can’t really believe is the killer because that was so 15 years ago. Then there are the other two resident film geeks Charlie (Rory Culkin) and Robbie (Erik Knudsen) who both share the Randy role from the first film. They explain to us and Gale and Sidney the new rules in horror films that have been established since in the past decade.

There are lots of new characters and most of them, not surprisingly don’t quite make it. But this is a Scream film after all and there are plenty of scary death sequences that Ghostface fans have been waiting years for. Craven does a good job of creating decent tension. This isn’t a film that is as scary as some recent scare fests like The Strangers or Paranormal Activity but it’s definitely the scariest Scream film since the original. And it’s definitely on the of funniest and it the nostalgia factor plays a great role here. The are so many great references to other movies and the conventions we can’t help but get a kick out of the nonstop nods to the other horror flicks we fans are obsessed with. Kevin Williamson’s writing is as sharp (pun intended) as ever, skewering (pun indended) everything from torture porn to remakes. The entire opening sequence, which is almost epic, stuffs so many great in jokes and sly meta humor you almost expect Anna Faris to jump out. And yet with all the laughing you’ll have plenty of time to be scared as well. And such a great job is done with updating the film for the modern age without ever being corny. I wonder if Ghostface would accept my friend request?

“Scream 4” is just hands down enjoyable. If you’re a fan of the series or just a horror fan in general there is a lot to love here. You’ll constantly be guessing about the killer’s identity and if you can actually predict what’s going to happen then you should probably become a psychic because Williamson and Craven still have plenty of great tricks up their sleeves even eleven years later. I certainly left the theater completely satisfied and smiling. GRADE: A

Hmm is anyone else experiencing problems with the images on this
blog loading? I'm trying to find out if its a problem on my end or if it's the blog.
Any responses would be greatly appreciated.

Hello, yup this paragraph is genuinely nice and I have learned lot of things from it on the topic
of blogging. thanks.