Lame of Thrones: “Your Highness” Offers Scattershot Laughs and Not Much More 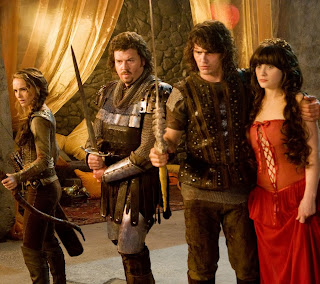 “What a coincidence. I was just about to finish thinking of you.”

“Pineapple Express” was good. I can’t image it would be very good if the setting was changed to a fantastical medieval world. And I’d never image that movie would exist. And it does as “Your Highness” a very bizarre hybrid of stoner comedy and swashbuckling medieval adventure. It’s basically a glorified nerd geek fest without any of the real charm or wit these movies tend to have (see “Paul” instead). The movie isn’t really a spoof, even though I think it thinks it wants to be Robin Hood: Men in Tights, because there aren’t any direct references to other movies that I noticed, not does it really offer much skewering of medieval tales, although that’s not really my area of expertise. It’s basically just a bunch of profanity, nudity and sexual references shoehorned into a fantastical plot about two prince brothers and a kidnapped princess. If you wanna see a spoof with a princess see “Enchanted” if you wanna hear dirty jokes see a Judd Apatow movie. This my dear friends is a film that looked much better on paper I’m sure.

If you find Danny McBride to be one of the most hilarious people on this planet then you will probably like “Your Highness” more than me. McBride is sort of like Russell Brand – he works better in smaller roles. I’m not sure either should really carry a film. Luckily here we get the always reliable (except when it comes to hosting duties) James Franco who took time off from Yale to play McBride’s brother Fabious. He’s the elder brother and the heir to the throne. Thadeous (McBride) is the schlubby younger brother who only seems to exist in the shadow of his older, adventure-seeking heroic brother. In Fabious’ latest conquest he has beheaded a Cyclops and had fallen in love with a fair maiden Belladonna (Zooey Deschanel). The two are wed, but then an evil sorcerer played by Justin Therox kidnaps her (she’s a virgin!) so he can have his dastardly way with her.

Of course the two brothers team up to with the rest of their knights, who turn out to be traitors, to find Belladonna. There they find all sorts of weird characters along the way including the Great Wize Wizard, a purple puppet character, who may or may not have molested Fabious when he was younger. (They used to take their shirts off and bounce on his bed together. Where’s Chris Hansen when you need him?) They receive a magical compass which will help them in their quest. They also meet up with loner Isabel (Natalie Portman) whose entire bloodline has been killed. Thadeous quickly falls in love with her, but will she love him back? They also get attacked by a race of pale nudists in one of the film’s many ridiculously strange sequences. The only explanation is that the filmmakers were high when they made this thing.

I honestly did laugh during “Your Highness.” There are some solid moments here and there, but all in all I think this film is a novelty that sort of outwears its welcome before the halfway mark. There are only so many time a word like “f*ck” is funny when in a medieval setting. The film is rather bloody too which I didn’t really mind so be weary not to bring the little ones for sure. I would categorize “Your Highness” as a misfire. It wasn’t offensive or incompetent – there is a level of talent that pervades the production, but it just doesn’t click. GRADE: C

It's actually very complex in this active life to listen news on Television, so I only use world
wide web for that purpose, and get the most recent information.

prada handbags 2013
I am really impressed with your writing skills and also with
the layout on your weblog. Is this a paid theme or did you modify it yourself?
Anyway keep up the excellent quality writing, it is rare to see
a great blog like this one today.