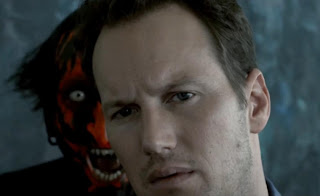 “It's not the house that's haunted. It's your son.”

I don’t scare too easily so let it be known that I jumped and screamed a lot while watching “Insidious.” If that’s all that’s required of a scary movie than this movie wins hands down. But besides the terrific spook factor, “Insidious” is an intelligent, wonderful little movie ironically from the writer and director of the first “Saw” film which wasn’t very intelligent nor very wonderful. But here director James Wan and writer/actor Leigh Whannell have crafted a wonderfully creepy story about a family and the things that go bump in the night. It amazingly never feels clichéd; maybe we should also credit “Paranormal Activity” director Oren Peli whose credited here as producer.

With a title like “Insidious” you know this movie is not going to be a happy experience. They could have easily called the film “Sinister,” “Menacing” or “Dangerous” or whatever words a thesaurus could have spit out. The menace starts when a nice family of five move into a suburban home. Dad is Josh (Patrick Wilson) a teacher, mom is Renai (Rose Byrne) who stays home and writes music, and their young sons Dalton (Ty Simpkins) and Foster (Andrew Astor) and their infant daughter. The house is old and creepy and it offers plenty of creaking sounds. Renai notices that sometimes things movie about seemingly on their own. Then young Dalton falls off a ladder in the attic and somehow ends up in a coma the next morning. The doctors say he’s medically fine, but he just won’t wake up. We, the audience, know better. Soon full on figures make themselves known, mostly to Renai; Josh is given the “you’re seeing things” role but does quickly begin to realize something sinister might be lurking. So this wise young couple actually does what everyone in haunted house movies should always do – move out.

Josh and Renai move their family to a new home, hoping to get some peace from ghostly figures who scarily appear in windows and who open their front door in the middle of the night. Of course with only half the film’s runtime gone, we know they’re still in for something way worse. Josh’s mother (Barbara Hershey) recommends they invite her friend Elise (Lin Shaye) who is a medium to their home and her two goofy ghostbuster sidekicks played by Angus Sampson and Whannell. It turns out that the house isn’t what’s haunted; it’s their son Dalton. Now that’s all I’m going to say story-wise. Sure it sounds sort of like “Poltergeist” meets “The Exorcist” and in a way it is, but it feels like a movie that could sit along side them; this is not just a rip-off. To say much more would ruin what some see as a shaky final act but I found ultimately rewarding. Some may dismiss it and I was tempted to at first, but I have to give credit to the filmmakers for going as far as they do and showing us things we haven’t really seen before.

Let’s go back to what makes this film actually pretty original and so downright scary. I have to say a good amount is paid to developing the character so we at least care about them – and they don’t do anything stupid that makes you dislike or distrust them. The scares themselves are genuine; there are shock moments that make you jump, but there’s never a true release. You jump and you’re still in dire suspense. There are no false scares – no cats jumping out or hands grabbing shoulders or silly CGI faces in the bathroom mirror. This is a film that builds the suspense throughout its duration and hardly lets go. The shots are perfectly framed for maximum fright. And let’s credit the “lipstick-face demon” as one of the most disturbingly terrifying images in a movie in some time. And Joseph Bishara’s score is spine-tingling and matches perfectly with every creak of the house.

If you don’t want to be scared, then don’t see “Insidious” - it’s that simple. It’s a competently made spook-fest with enough shocks and suspense to scare even the toughest horror fans. Wan who we’re used to showing us blood and guts does none of that here and takes us back to the simple things that scare the heck out of us. There are no sawed off limbs here; just good old fashioned haunted house thrills. It’s insidiously entertaining. GRADE: A-

E-commerce, or electronic commerce, is an e-business application aimed
at commercial transactions typically using the World Wide Web and other computer technologies such as databases and e-mails.
The above describes the criteria for selection for this job.
your marketing efforts in the real world to help build your email lists.


Look into my web blog - Acheter base de données email

The information is very good indeed, may be useful for everything