Something to Stalk About: “Greta” is a Fun, If Standard, Campy Stalker Thriller 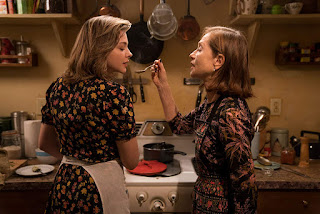 Call me disheartened but I refuse to believe anyone in New York City would take the time to travel to a complete stranger’s home to return a lost purse. At least not alone. And yet that’s exactly the premise of “Greta,” a movie in which no one really acts like a real human being. Thankfully “Greta” devolves into a campy stalker thriller so that’s ok in my book. It stars recent Oscar nominee Isabelle Huppert doing her crazy worst as a woman who baits naive people with “lost” purses around the city hoping to form a friendship and then going all “Misery” on them. “Greta” reminds me of the early 90s stalker dramas; your “Single White Females” your “Hand That Rock the Cradles” and I’m all for it. It does very little to be all that unique or different, but it’s well-paced, entertaining, and features a wildly fun to watch Huppert who chews up and spits out the scenery around her, sometimes even flipping tables over in process.

Enter Chloe Grace Moretz’ Frances McCullen who takes Greta’s bait hook line and sinker. Frances is a nice girl from Boston. She just moved to Manhattan where she’s living with her friend Erica (Maika Monroe) whose father bought her an apartment for graduation. At least they try to explain why two young twenty-somethings have a killer pad. Frances finds a purse on the subway, tries to drop it off at the lost and found – which has nobody working there – and takes the purse home. She decides to be a good Samaritan and return the bag to its owner. When she arrives to a cute little offset apartment building, she finds an even cuter older French woman named Greta (Huppert) who is thrilled to see her purse and offers Frances some coffee. Don’t go in there!!

The two women are obviously lonely people and quickly find a connection. In real life, these people would never see each other again. But we’re watching a crazy stalker thriller so naturally the two women exchange phone numbers and continue to meet up and hang out. Erica who seemingly spends all her time doing yoga in her huge apartment things Frances is insane for hanging out with a woman she doesn’t even know. And then one night when at Greta’s place for dinner, Frances fines a cupboard full of the same purse she found and returned to Greta. It freaks her out naturally and she promptly leaves without giving Greta much of an explanation. And then soon Greta wonders why Frances refuses to answer her texts or calls. And then it gets crazier from there.

The film is surprisingly directed by Neil Jordan who gave us such cinematic classics as “The Crying Game” (a film I can’t say I’m a fan of) and “Interview With the Vampire” (which is campy enough itself). His last real impact in mainstream film was the Jodie Foster starring the NYC-set “The Brave One” which followed its own worn out vigilante storyline. Jordan also co-wrote the film (he shares credit with Ray Wright who wrote the story) and it he has certainly crafted a beautiful movie (it was shot by Seamus McGarvey) but besides some tense moments it doesn’t quite offer anything new or all that surprising. I find myself wondering what someone like Jordan saw in this well-worn material. I think one of the biggest flaws from my point of view is Moretz who isn’t given that much to do with this character and comes off a tad bland. She’s lonely because she’s recently lost her mother but she’s mostly reactive to all the crazy stuff that Greta is doing to her. Stalking her at work, following her friends around, and being a general nut bag. This is Isabelle Huppert’s show and she’s insanely good. Literally. The film’s final act isn’t very original but it’s surprisingly satisfying.

In the end, what’s the point of all this? It’s just a somewhat over-the-top thriller about a crazy woman. But it’s entire existence is predicated on the fact that Frances would even return a purse she found on the subway. I believe that there are good people in the world. But turn you gotta turn that stuff into the police. Otherwise you might end up starring in a crazy bitch thriller.  GRADE: B