Live/Die/Repeat: The Ridiculous “Happy Death Day 2U” Makes No Sense But is Fiendishly Fun 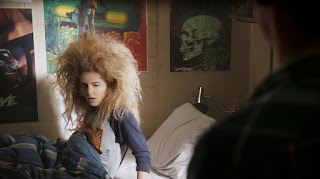 Where does one even begin? Put simply “Happy Death Day 2U” is an utterly ridiculous and preposterous sequel, one in which they try to explain the events the first film with “science” that hardly makes a lick of sense. But you know what else this movie is? FUN AS HELL. This is one of those movies where the intellectual me is telling me “This is so stupid and ridiculous!” and yet I couldn’t help but just go with it and have some fun. Everyone involved in “Happy Death Day 2U” is having an absolute blast and it completely comes across onscreen. They totally embrace the goofy premise and the actors, especially lead Jessica Rothe, are completely selling it. The film is way more focused on humor and the campiness of it all and if you’re willing to accept the nonsense you’ll have as much fun as you did watching the first film.

Jessica Rothe is yet again fantastic in the role of Tree. In the first film Tree was a bitchy sorority girl who wasn’t very likable. By the end of the film I wanted to be friends with her. That is a testament to the great arch the character goes through and the likability of Rothe as a performer and her innate ability to sell an insane storyline. To me, she was “Happy Death Day.” And she’s thankfully back in this even more bonkers sequel and she nails it yet again.

Taking place the day after the events of the first film – Tree and Carter (and equally charming Israel Broussard) are now a couple – but Carter’s roommate Ryan (Phi Vu) begins to experience the same time loop that Tree experienced in the first film. It turns out Ryan and his nerdy science buddies have made some kind of experimental quantum reactor (because of course they have) that has created weird rifts in time. When the thing goes off again, it sends Tree back to the day before to experience the same day over and over that we saw in the first film that results in Tree being murdered by someone in a baby mask. Except this time, there are some major differences, some of which have emotional and life altering consequences. In other words, it’s all pretty stupid and absurd but as you get into it, like the first film, you begin to buy what their selling and I bought a whole lot it.

Director Christopher Landon, who directed the delightful first film has also written this adventure and it really just goes for it (there’s an entire suicide montage ala “Groundhog Day” that finds Tree jumping out of planes, into wood chippers, etc). Seeing him just embrace the strange premise and actually making it work somehow is a testament to how likable these characters truly are. He has also wisely beefed up some of the roles of secondary characters from the first film and given them much more to do. For instance, Danielle, Tree’s even bitchier sorority sister, (Rachel Matthews) has her own movie stealing performance in the film’s third act that is as offensive as it is hilarious and relies solely on amazing physical comedy. Also, the film explores more of the drama surrounding Tree and her mother offering a surprising emotional dimension to the proceedings that may have even brought a tear to my eye.

The sci-fi bent “Happy Death Day 2U” will either lose you or hook you within the first 20 minutes. I say you should stick it out to see how everything plays out. The plot certainly doesn’t hold up to scrutiny. You can’t quite make sense of some of the preposterous story elements introduced – and those expecting anything resembling a slasher film will be severely disappointed – but it almost doesn’t matter. The film is a fun conglomerate of “Groundhog Day,” “Back to the Future Part II” and “Sorority Row.” If that doesn’t sound like a good time I don’t know what is.  GRADE: B+