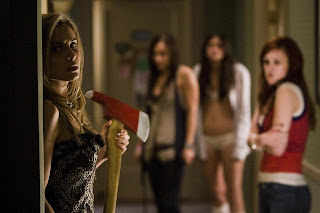 You simply can’t take a movie like “Sorority Row” seriously. I mean the movie opens and we see a pajama party taking place in a sorority house in which co-eds bare their butts while jumping on a trampoline. Actually this first shot is pretty impressive. I didn’t notice a single cut for a few minutes. Was this a “Touch of Evil” homage? Who knows. What I do know, is that if you’re a fan of any horror film that was made in the 80s you’re bound to find something in “Sorority Row” to love.

The film is based on “The House on Sorority Row” which was released way back in 1983, but since I was merely a new born back then, I was unable to experience it in theaters. So now we have an updated version which sort of plays like “Gossip Girl” meets “I Know What You Did Last Summer.” It’s about a stupid prank that goes horribly awry. It appears that a guy cheated on one of the Theta Pi sisters. And if you cheat on one Theta you cheat on every Theta. So they decide to teach this dude a lesson and the girl who he cheated on, Megan (Audrina Patridge), pretends to die from a pill that she was given. They decide to cover up the crime and drive out to the middle of nowhere. The sisters look for “sharp rocks to cut up the body” meanwhile, Garett (Matt O'Leary)the tool that’s being punk'd, whips out a tire iron and stabs Megan in the chest, which you guessed it, kills her for real. So they decide to cover up the crime for real, and in true horror movie fashion, the story flash forwards “8 months later.”

Cassidy (Briana Evigan) is the one sister, and inevitable ‘final girl,’ who has a conscience and never really wanted to go along with the cover up. We also have my personal favorite character Jessica (played with bitchy perfection by Leah Pipes) who is the blonde sorority president who is the Queen Bee. She’s given the best lines and she delivers them with skanky finesse. Unfortunately we also get Rumar Willis who basically is horrible as the sister who just can’t deal with the stress and has to cry every five minutes. Why she doesn’t get killed off first, I’ll never know. And Korean-American actress Jamie Chung adds the necessary diversity to the strictly all white cast.

So if you haven’t guessed by now, after eight months, someone knows these girls’ “secret” and is going to kill them off one by one. It’s finally slasher time! We get a wine bottle down a throat and lots of slashings by way of a pimped out tire iron. I have to praise director Stewart Hendler, who, even though this is his first feature film, seems to know the genre pretty well. He stays close to nearly every cliché and frankly I wouldn’t have it any other way. If you want to see an original horror film unlike anything you’ve ever seen before, “Sorority Row” is not the movie for you. It retains the cheesy yet classic elements of slasher movies of 80s past. Think: "Prom Night," "My Bloody Valentine," "Graduation Day," "The Initiation," etc.

This is not “torture porn” which seems to have been the focus for horror films of the past few years, but a genuinely fun slasher movie complete with hooded killer. Some of the dialogue, while at times painfully bad, can actually be pretty witty at times. Like I said Ms. Pipes luckily gets the best lines. So yeah, I mean this isn’t classic cinema by any means. This isn’t “Citizen Kane,” it’s not even “Halloween” but like the recent campy thrill ride “The Final Destination,” “Sorority Row” is destined to be another cult horror classic that will be rewatched over and over again by horror movie fans for years to come. GRADE: B

PS – Carrie Fisher is simply awesome as Theta Pi's house mother. She wields a mean shotgun and she totally deserved her own shoutout. Ms. Fisher I salute you.