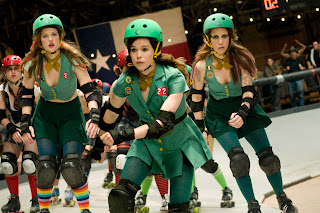 “Whip It” is one of those “triumph” in the end movies, in which a young person goes against their parents’ wishes and proves that their love of a particular sport or activity was worth all his or her secrecy. The plot is nothing new and technically the way the story is told is nothing new, but the actors certainly lift it above standard underdog story. Unfortunately this is going to be just considered “Juno on skates” and while in some ways it is (it’s quirky, weird, funny and hip) it’s not nearly as well written or directed. And I’m okay with that. Drew Barrymore makes a nice debut and while she’s no Alfred Hitchcock, and seriously who is, she brings enough to the table to have a warm and enjoyable enough time.

I’m going to be honest and say that I was super psyched for this movie. I watched the trailer over and over and it gave me chills. It was so happy and fun and colorful. I couldn’t wait to see Ellen Page’s next performance (although I’m starting to worry that she might be typecast as the quirky rebel girl). And then I saw the movie and while I liked it, I have to say on the whole I felt slightly disappointed. But it’s totally my fault and not the movie’s. it’s sort of like when I built up “Slumdog Millionaire.” I was really excited and then I saw the movie and I was like, seriously what’s the big freakin’ deal?

“Whip It” takes place in a small town in Texas. Seventeen year old Bliss’ (Page who is wonderful of course) mother forces her to participate in sexist beauty pageants because frankly I guess that’s all there is for girls to do in small town Texas. However, one day she sees a few “alternative-looking” girls on rollerskates. It turns out they’re in a Roller Derby league and it piques Bliss’ interest. She goes to see a bout with her best friend Pash (Alia Shawkat from ‘Arrested Development’) and is instantly transfixed. She’s encouraged to try out for the league and although she’s underage (you have to be 21) she does it anyways. She goes from falling over in her Barbie skates to being one of the best members on her team (yeah right).

Bliss doesn’t tell her folks that she’s participating in roller derby, because she assumes they “won’t understand,” which is probably a correct assessment. Her mother Brooke, played by the always reliable Marcia Gay Harden, participated in beauty pageants as a young girl and has passed down her unattainable dream to Bliss, who doesn’t even want it. Her dad, played by Daniel Stern, (who apparently has been hiding under a rock or something) is just portrayed as a typical Texan goofball. Bliss’ parents are nice enough but nowhere near as sympathetic as Juno’s dad and stepmom were in “Juno.”

And that brings me to the best part of the film and that is Bliss’ fellow teammates. We get SNL’s Kristen Wiig who is reliable. She’s more serious than we normally see her, but still fun. Quentin Tarantino’s favorite stunt lady Zoe Bell shows up as does rapper Eve. Barrymore shows up as the team’s funniest member who always seems to be getting punched in the face. It makes sense that Barrymore would play this role because its small enough for her to fulfill her directorial duties but potent enough to be remembered. Andrew Wilson is Razor, the team’s headbanded coach. And last but not least, Juliet Lewis shows up as the team’s nemesis.

Unfortunately while the roller derby scenes are fun and full of energy (and don’t worry the film does a decent job of showing us how the game is played) it gets bogged down by an unnecessary romance element that grinds the film’s fun momentum to a halt. Bliss catches the eye of a weird rock singer and she falls for him and they have a little fling. Of course I’m sure he’d love to hear that by the film’s end he’s unkowningly committed statutory rape. Fun huh?

“Whip It” has familiar story elements (writer Shauna Cross adapted the film from her novel) which you’ve seen dozens of times before, but I’m willing to state that the winning cast does a great job of making it all worth it. This is a fun effort from Barrymore. I’m interested to see what else she has up her sleeves. The film’s look is simple and isn’t particularly flashy. I’ll call it competent. The real reason to see the film is Ellen Page who always manages to make a film even better than it should be. While this is really just Juno-lite, it offers enough fun for a recommendation. GRADE: B-

An impressive share! I have just forwarded this onto a co-worker who has been doing a little homework on this.
And he in fact ordered me lunch because I discovered it for him...
lol. So let me reword this.... Thanks for the meal!!
But yeah, thanx for spending time to discuss this issue here on your web site.

The information that is interesting, thanks for sharing :)