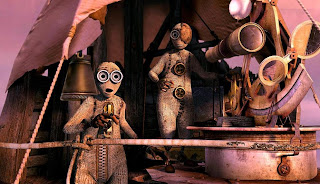 The animated post apocalyptic adventure ‘9" opened in theaters on, you guessed it, September 9th 2009. Much like the release of the remake of The Omen (which was released on 6-6-06) it seemed destined to be more of a gimmick more than anything else. Of course that is just dead wrong because "9" is an incredible wonder. A fun ride with lovable characters, frightening villains, and a fascinating visual design that is sure to wow you.

Ok so I was worried that this movie would be long and boring. But when I found out that it was literally 79 minutes (9 of which were most likely just credits) long I was generally estatic. I honestly had some lower expectations for this movie because I figured it would be all style and no substance and therefore a slog to sit through. That was the case with the film Coraline which came out earlier this year. At 100 minutes that flick was about 30 minutes too long and I almost couldn’t wait for it to be over. Director Shane Acker had no problem turning his short film into a runtime that flies by and yet keeps you captivated for 79 wonderful minutes.
I almost want to say the film’s animation style skewers towards stop-motion animation, but it’s definitely CG and I’m ok with that. While the film is dark and more appealing to older audiences, I was surprised at how wonderfully appealing a post-apocalyptic world could look. And if you think the background looks great don’t even get me started on…
The story involves a man who creates 9 different rag doll figures who he brings to life. We learn they are actually nine separate aspects of his personality. 9 is the main character who gives the film its title and you’re almost instantly entranced by him. He meets others who are just as lovable. I could tell right away that if I was ten years old, I would definitely want every "9" toy.
The character 9 is voiced by Elijah Wood and he’s an excellent choice, because a) he has a unique voice and b) because his voice lends an innocence that fits the character perfectly. He sounds young and naïve and it helps the viewer connect almost instantly. Of course, the other actors are fine as well. We get Jennifer Connelly, John C. Riley, Christopher Plummer, Martin Landau, and Crispin Glover as the other numbered characters. Each actor, along with the animators, create easily distinguishable characters.
I’ve been gushing about this flick and you probably don’t even know what I’m talking about. "9" takes place in the future. Like every other post apocalyptic tale (I’m thinking Terminator) we learn that technology has found a way to revolt against humans. The machines take over leaving a desolate wasteland behind. "9" more specifically tells the story of 9 who awakens to find himself in this wasteland and finds a small band of survivors who look just like him. They’re fighting off the evil machines one of which kidnaps one of these survivors. It seems as though only 9 can help to get him back. Writer Pamela Pettler, whose script is based on a story by Acker has managed to turn 79 minutes into a gripping tale of survival. This is an suspenseful action adventure story that just happens to be animated.
I’m not necessarily sure that "9" is a movie that will have mass appeal and I certainly can’t honestly recommend it to everyone. But if you’re a fan of either animation, or sci-fi, or just a good action adventure than "9" is certainly almost a guaranteed good time. GRADE: B+

Paragraph writing is also a excitement, if you be familiar with
after that you can write if not it is complicated to write.

Great post. I was checking constantly this blog and I am impressed!

I was seeking this certain info for a very long time.
Thank you and good luck.

Excellent web site. Lots of helpful info here. I am sending it
to several buddies ans additionally sharing in delicious.

And naturally, thank you to your sweat!

Your website must give you a clear message using a goal-oriented direction, setting you apart from your competitors.

Investors are there to help you the entrepreneur and to realize a benefit from their investment through the
entrepreneurs company. it can also be used for headhunting and employment.


Here is my homepage http://wallpapers.ga/profile/mabfo

Now I am going away to do my breakfast, afterward
having my breakfast coming again to read more news.


This information is very useful. thank you for sharing. and I will also share information about health through the website

the article is very petrifying, hopefully it can be useful and an important lesson