The Seventeen Year Bitch: “Jennifer’s Body” is Not Another Teen Movie 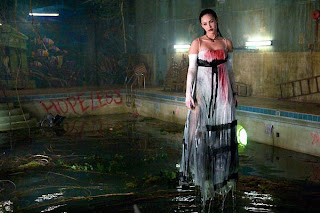 “Jennifer’s Body” is not a movie I can recommend to everyone. Writer/former stripper Diablo Cody, who tries her hand at the teen horror genre, weaves a strange tale of female rage against the machine (the machine here is boys). If you liked Juno, you’ll find something to like here, which mostly includes Cody’s trademark cool and hip dialogue (“move on dot org” is so this year’s “honest to blog”). And if you crossed Juno’s post-modern coolness with that of last years indie cult horror hit “Teeth” in which a teenage girl’s vagina is equipped with a nasty and angry set of jaws, you can pretty get a vague understanding of what “Jennifer’s Body” is like. It’s certainly original, in terms of the horror genre, but I’m not even really sure I’d even call it a horror film. It seems like a really really really dark comedy. Think “Juno” with teeth in her genitalia.

“Jennifer’s Body” is a movie made by women. Like I said Oscar winner Diablo Cody is behind the words and director Karyn Kusama is behind the lens. I guess you could call the film a feminist look at high school. What we get is the story of two best girlfriends. One is Needy, who is played by Amanda Seyfried. She’s slightly nerdy, but cool enough to get by. She has an equally goofy yet charming boyfriend. She’s hardly on the lower ranks of the popularity echelon. Although maybe she’s a little needy, for lack of a better word. What she needs is her best friend Jennifer (the perfectly cast Megan Fox who expands on her I’m the pretty girl image from the “Transformers” role) who is the popular/hot girl who all guys go gaga for and all the girls want to be like. Frankly I don’t believe it because Jennifer is in the colorguard and frankly they’re never the most popular girls in school. Although Jennifer is the popular hot chick, she’s not really mean nor nasty. That is until she’s taken away by the members of an indie rock band called Low Shoulder, headlined by actor Adam Brody who will always be known to me as Seth Cohen from “The OC.” They take her away in a van after the bar where they’re playing burns to the ground, along with some of the town’s citizens. And when Jennifer returns, she’s not really the same person. Like all teenage girls, she’s boy crazy, but now she’s boy hungry. Jennifer quickly gobbles up a jock in the woods behind he school and Needy is curious as to why the male population at school seems to be dwindling.

If I heard this premise and didn’t know who was writing it, I would almost without hesitation not give it another look. I’d think it was a story guaranteed to wind up in the DVD bargain bin at your favorite local megastore. For some reason, Cody’s flashy writing and nose for clever dialogue is really what keeps this thing a float. And that is why I see this film more as a comedy than straight out horror. Yeah this thing is violent and has buckets of blood, but I’m not sure I’d say any of it was particularly scary. But I’m ok with that. Because as long as you can read it as a metaphor for high school and all things adolescence then it works. The performances here work, mostly because what the actors have coming out of their mouths are witty and fun. We see the film mostly through Needy’s eyes, not Jennifer’s, and it is her who we identify. It’s odd that she seems almost just as infatuated with Jennifer as all the boys in the school are, and we’re to wonder what exactly her character’s desires lay.

I wouldn’t really call this a boys are bad movie, in that I should be offended because its about a girl who kills boys, but rather a movie that has the guts to be horrific and yet sternly funny. In fact I see it more of a spoof of high school clichés more than anything else. Everyone knew that “mean, bitchy girl” in high school, and this movie dares to ask the question. What if that mean, bitchy girl was actually evil evil, not high school evil? It’s just like eleven years ago when the movie “The Faculty” answered the question, what if your teachers really were aliens?

So yes, I recommend this movie and while it’s certainly weird and different, and occasionally sloppy in its plotting (why does Needy seem to gain some sort of ESP power?), I think it’s clever dialogue and dark humor is what is really on display here. If you thought Juno was too hip for its own good then you’ll probably find this film a slog to sit through, but if you’re prepared to see what an indie rock band is willing to do to become famous, you should do yourself a favor and check out “Jennifer’s Body.” GRADE: B