La La Land: Tarantino’s “Once Upon a Time... in Hollywood” is an Exquisite Ode to Tinseltown 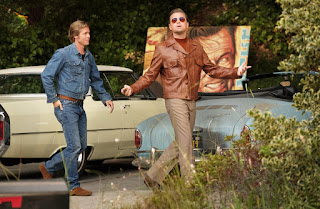 At one point in the classic 70s comedy “Annie Hall” the eternally neurotic Woody Allen character Alvy Singer notes that one of the reasons he hates Los Angeles is because of “ritual religious-cult murders.” Fifty years after the Manson “family” committed several horrific, notorious murders and other crimes, the country is still obsessed with those terrible crimes. And in a way, so is Quentin Tarantino. But he wasn't interested in making a traditional movie about the Manson murders. Tarantino has made a fairy tale set in 1969 Hollywood that’s an ode to changing times in America that fuses real life characters and events with fictional characters in a tribute to Hollywood that is truly the pinnacle of his decades-long career. “Once Upon a Time… In Hollywood” is a fascinating mix of drama, comedy, crime, and nostalgia that is completely compelling and brims with tension for its thoroughly well-paced runtime. The film is truly a masterpiece which is saying something considering there aren't many duds in his filmography.


It seems that every time Quentin Tarantino releases a film it’s his new classic. “Once Upon a Time… in Hollywood” is his new classic. There I said it. Tarantino is the ultimate film nerd. He could wipe the floor with anyone would try to challenge him. And he really proves it in his latest film which is a gorgeous ode to Hollywood and movies. It truly feels as if all the roads he’s traveled down has been leading up to this brilliant piece of work. The film stars Leonardo DiCaprio as an actor named Rick Dalton, who is famous for staring in a TV western but his stardom is quickly fading. His former stunt man and friend Cliff (Brad Pitt) works as his personal driver. The two are great friends and are actually very reliant on each other, more so than they truly realize. Rick lives next door to filmmaker Roman Polanski and his wife Sharon Tate and he dreams of meeting them one day in the hopes of reigniting his career.

The film follows Rick as he tries to jump-start his career by taking bit parts in shows while refusing to an offer to star in some Spaghetti Westerns in Italy from his agent Marvin Schwartz (Al Pacino). Meanwhile, we get to see Cliff’s rather mundane life as he drives around alone and spends time in his trailer with his well-trained pitbull Brandy. He picks up a hippie girl who’s hitchhiking and ends up at a deserted movie ranch where the Manson family lives. And as the film progresses we get to see what rising movie star Sharon Tate is up to. She spends an afternoon at a movie theater watching her own film completely compelled by the magic of watching herself onscreen.


The film not only functions as a character piece about the trials and tribulations of a fading TV actor and his best friend, but also as a document of the end of the 1960s and and the introduction of the harsh reality of the 1970s. At someone who wasn’t yet alive, the film feels pretty authentic; everything from the costumes, to the set design, to the cinematography (by longtime Tarantino collaborator Robert Richardson) everything here just looks right. And you can really see how much Tarantino has grown as a screenwriter, director and as a storyteller. Even if the narrative isn’t always “normal” it’s arguably his most sophisticated film. There’s no need for chapter titles or any of that gimmicky stuff, but all the other trademark Tarantinoisms are there. Lots of dialogue-driven scenes, fun twists in the narrative, mentions of obscure movies you’ve never heard of, a soundtrack filled with equally obscure and familiar tunes, humor in places you’re not expecting, and of course spouts of graphic violence that are…. well the less spoiled about that the better.


“Once Upon a Time… in Hollywood” is a movie for people who love and appreciate movies. But it’s also so much more. Tarantino isn’t new to revising historical events in his films (ie Inglorious Basterds) so it may not take a genius to figure out that things don’t necessarily play out very historically accurate here and that’s all for the better. The film is a wild ride and a glorious genre-bending piece of celluloid that will be remembered for years to come; it features fantastic performances from its very famous and charming leads (not to mention a laundry list of celebrity bit parts and cameos) and one of the most memorable and whacked out final acts I’ve seen in quite some time. As the title suggests it’s really a Tarantino fairy tale and it just may be the most Tarantinoy film that ever Tarantinoed. GRADE: A