Maternal Sunshine of the Insane Mind: Octavia Spencer Makes “Ma” Worth Your Time 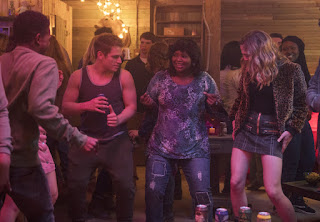 “Ma” is directed by the same guy who directed Octavia Spencer to an Oscar win for “The Help.” That would be Tate Taylor and he’s certainly not the most visually exciting filmmaker working today but he knows how to get great performances out of actors. The brilliant Ms. Spencer needs no help however and she finally marks her first real lead role with a perfect balance of weirdness and psychotic glee as the murderous Ma of the film’s title. “Ma” is an exploitation film that is elevated by the presence of great actors letting loose and realizing that doing trashy genre work is where the most fun roles are. It’s the teenage characters who don’t get to have nearly as much fun. The film feels like one of those creepy early 90s thrillers where a seemingly nice character turns out to be a wacko. Sign me up.

Produced by outstanding horror production company Blumhouse – who specializes in low budget films with smart scripts made by talented filmmakers - “Ma” is the type of film that could either be utter garbage or something special. I’d say it falls somewhere in-between. The film follows a teenage girl who moves with her mom from California to the Midwest. She befriends a small group of kids who enjoy spending their time trying to get booze and drugs. The straitlaced Maggie (Diana Silvers) isn’t about give up the chance to make friends so she plays along. The kids hang out in their friend Andy’s dad’s van outside a liquor store and try to get adults to buy them alcohol. There they come across a nice woman who’s walking a three legged dog. She initially says she’s not interested in buying them beer, but then figures why not be the cool adult for once? This seemingly sweet woman is Sue Anne (Spencer) and she just so happens to be batshit crazy. Of course the kids don’t know this yet. Sue Anne lets the kids come to her house and party in her basement since she’d rather them drink there rather than driving drunk. They even nickname her ‘Ma.’ The fact that Ma may have ulterior motives is another story...

It’s no surprise that Octavia is essentially doing her best Annie Wilkes. No one plays crazy quite like Kathy Bates, but Spencer is certainly up to the task. The character actress has basically been typecast as the mom or best friend - usually in a 1960s setting. Here she gets to be fully unleashed and it’s magical to watch. Nothing in Scotty Landes’ script is particularly original or groundbreaking; it’s essentially the groundwork for a plump, juicy role for a woman nearing middle age. And since Spencer is so great in a role that she’s never quite done before, it’s the teenagers who are somewhat bland and forgettable. They don’t really get to do much besides party and act like fools and eventually complain about how creepy and weird Ma is getting.

“Ma” takes its time building suspense, Spencer is fantastic, and the score from composer Gregory Tripi is great. This is essentially low budget trash that has found its way to the mainstream and I'm totally fine with that because Spencer has finally gotten a great lead role. I don’t think it transcends the genre and it’s not quite up the level of what Kathy Bates was able to accomplish in “Misery” but it’s schlocky, goofy fun with a delightful wicked streak – especially in the final act, though things don’t quite go as far as I expected but I sure enjoyed my time at Ma’s and witnessing her slowly become unhinged.  GRADE: B

When I originally commented I clicked the -Notify me when new comments are added- checkbox and now when a comment is added I get four emails sticking with the same comment. Could there be in any manner you are able to remove me from that service? Thanks! White wine for sale

go to this web-site more helpful hints find out here this hyperlink continue reading this https://www.dolabuy.co