Sister Hacked: The Conjuring Universe’s “The Nun” is Disturbingly Unscary 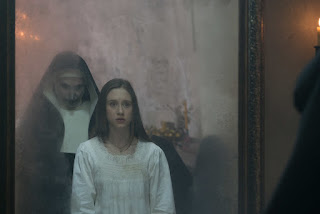 Let’s begin with the positives. As weird as it may be, it’s cool that there’s even a “Conjuring Universe.” “The Nun” adds little to a series that has seen as many lows as highs. The film, the fifth in this shared cinematic universe, is arguably the weakest and most offensively the least scary and is a constant reminder at how well-made the main Conjuring films truly are. Taking place at a remote convent in Romania in the 1950s “The Nun” follows a young novitiate and a seasoned priest who investigate the mysterious circumstances surrounding another nun’s suicide. After a somewhat silly but halfway decent opening, we’re left with uninteresting characters investigating an uninteresting case and wish that somehow Ed and Lorraine Warren will show up to make things more entertaining. Alas it’s not quite meant to be.

In “The Conjuring 2” we learn about an evil demon known as Valak who takes the form of a creepy nun. This figures heavily into the film’s plot so of course it seemed obvious to be next secondary character to receive the spinoff treatment. However, nothing about this creepy nun is ever as effective or scary in “The Nun.” In an admittedly clever bit of casting, Taissa Farmiga (The Conjuring’s Vera Farmiga’s younger sister) plays Sister Irene and she’s fine in the thankless role. Demian Bichir is Father Burke who accompanies the young woman to help solve the mystery of the suicidal nun. Then there’s the farm hand/delivery guy who discovered the dead nun “Frenchie” (Jonas Bloquet) who seems to be in a different film altogether. Desperate to add a bit of humor to the dire, too serious film, Bloquet is charming but even his baby blues can’t save this turkey.

Things go bump in the night. There are weird visions. Father Burke ends up buried alive. Frenchie is attacked by a demonic entity. It’s all dull and boring until “the blood of Jesus Christ” figures into the plot and then it’s just ridiculous. The only remotely scary part in the entire movie was much scarier in the theatrical trailer. There’s actually nothing particularly awful about Corin Hardy’s film it’s just that it’s resoundingly forgettable and unexciting. The script, unsurprisingly comes from Gary Dauberman who also wrote "Annabelle" and "Annabelle: Creation" which are both fine in their own ways, but highly flawed. His surprising credit on “It” is comforted by the fact that two others are credited on that one.


It’s a fact that the main Conjuring films are where it really counts in this “cinematic universe.” Less seasoned horror enthusiasts might jump here and there but “The Nun” offers very little to hardcore fans of the genre or anyone else who is familiar with films about things that go bump in the night. The only real benefit of the “The Nun” was having the idea to watch “Sister Act” upon my arrival at home.  GRADE: C