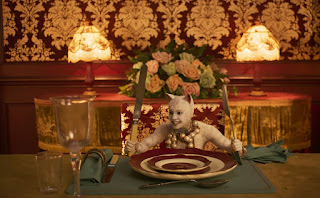 "Cats" isn't exactly the cat-astrophe I was expecting. But don't worry it's still pretty terrible. The film isn't exactly "so bad it's good" but I imagine it will gain a cult following in the years to come the way film musical oddities "Tommy" and "The Rocky Horror Picture" have. People will look back on "Cats" and wonder what exactly was everyone involved thinking?? The film fails on multiple levels but the real sad thing is that the movie wastes its talented cast. The film consists of a troupe of well known actors (Judi Dench! Idris Elba! Jennifer Hudson! Ian McKellan! Rebel Wilson!) who have no business being here and lesser known performers who were hired for their amazing dancing skills. But when covered in grotesque CGI fur something gets lost in translation and the magic of watching talented dancers is heavily muted. Your mind knows you're watching computer imagery so you feel like the dancing is artificially created as well. And that's a shame.

As a non-fan of the disturbingly popular Andrew Lloyd Webber stage musical, (I prefer "Phantom of the Opera") most of the film was completely lost on me. There's a catchy tune here and there and I found myself tapping my foot to the beat but the music mostly feels outdated, corny, and unmemorable. Again, the actors are trying but moments that are supposed to be moving and dramatic come across as garish and silly. Jennifer Hudson's rendition of Memory is fine, but I just couldn't take her cat face seriously. And then there's Judi Dench and her distracting whisker mustache. I couldn't look away. And for God's sake why are these characters wearing fur coats??

Having sat through Tom Hooper's bizarre, ill-conceived film I have way more questions than answers. If the cats are supposed to actually be the size of cats in world where regular sized humans exist then why are there places like the Catsino and The Meow Bar? And I still don't even know what a Jellicle cat is nor do I really care to find out what happens to Jennifer Hudson after she sets off onto her hot air balloon. Ugh what a truly wacko film. There's certainly nothing else quite like it that's for damn sure.  GRADE: D
Posted by Chris at 1:39 PM