Chomp & Circumstance: “Crawl” is a Disaster Film Thriller With Bite 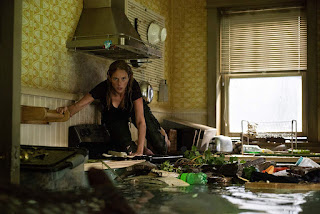 The utterly absurd “Crawl” is two great films in one: it’s an animal attack movie and it’s a disaster movie. In other words, it’s right up my alley. Set in one location, “Crawl” is an intimate, quick-paced thriller about a young woman who gets trapped in the crawl space under her dad’s house, during a hurricane with rising waters, with menacing alligators. If that doesn’t make you want to see “Crawl” nothing will. With a welcome return to form by horror director Alexandre Aja (High Tension, The Hills Have Eyes, Piranha 3D), “Crawl” is a fun, efficient disaster film punctuated by graphic alligator attacks. But it’s also a character piece about an estranged father and daughter with just enough sappiness to make the entire endeavor (which is sort of “Cujo” in a crawl space with alligators) one of the more ridiculous – and flat out intense and entertaining – movies in this underwhelming summer.

The setup in “Crawl” is thankfully quite simple. Haley (Kaya Scodelario) is a college swimmer in Florida and an intense hurricane is quickly approaching. Her sister Beth hasn’t heard from their newly single father Dave (a grizzled Barry Pepper) and asks Haley to check on him as the storm approaches even though people are being told to evacuate. At first, as Haley’s search is futile, I began thinking, this guy obviously doesn’t want to be found. Who doesn’t answer their phone? Who abandons their dog during a storm? This guy is dead weight. And then she finds him in the crawl space of his house and he’s been ATTACKED BY A FRIGGIN’ ALLIGATOR. And that’s the premise: watching this father-daughter duo try to escape the crawl space of a house as the rain water rises as a disgruntled alligator wades around. They were likable that I rooted for them to live, but I prayed for their dog.

Alexander Aja who is known for some of his over-the-top gore moments in his horror films, piles on the vicious animal attacks in “Crawl.” He wisely focuses mostly on suspense – this is an intense ride – but the brutality really shows how powerful and scary alligators can be. Of course they’re just trying to survive; they’re not necessarily presented as horrible monsters but I’m no gator expert. The visual effects are convincing enough; I don’t imagine this is a hugely budgeted film but I think the final product ends up working remarkably well.

The fact that this film literally comes to us nearly 20 years to the day of another reptilian animal attack movie – the much maligned horror-comedy “Lake Placid” - is sort of beautiful cinematic kismet. I’ve never been shy about proclaiming my affinity for killer animal movies whether they’re good ones like “Jaws,” “The Birds,” or “Piranha” (both of them) or guilty pleasures like “Deep Blue Sea” and “Lake Placid.” “Crawl” isn’t particularly new or groundbreaking material but it’s a ridiculous premise that works and was fully funded by a major studio (good ol’ Paramount) and if that means more killer animal movies then I’m so ready.  GRADE: B+