Snap Out of It: Is There Any Film More Satisfying Than “Avengers: Endgame?” 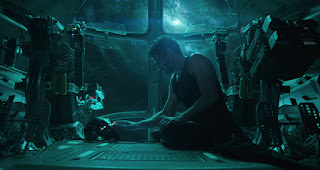 There has been nothing quite like the Marvel Cinematic Universe and there has never been anything quite like “Avengers: Endgame.” It’s no easy task weaving elements and characters from a series of 21 feature films that connect, overlap, and converge into a three hour mega-finale that is everything you want it to be and more. It’s – dare I say it – a perfect closing saga. Emotionally wrought with elements that have real consequences for whatever comes next. You’ll laugh, you’ll cry, you’ll have the time of your life. “Avengers: Endgame” is a shockingly compelling finale and has everything to offer those of us who have spent the last ten years getting to know and love these characters.

Is there anything more daunting than reviewing a movie like “Endgame” without talking about what happens in it? I promise not to give anything important away but the best advice I can give you – even at this point in time with the film being in five days of release – that the best thing you can do is go see the film and not read ANYTHING about it. Nada. Zip. The less you know going in the more fun it will all be. To be fair, that’s true for any film but especially for this particularly exciting endeavor. I shall do my best with giving you a bit of set up without really telling you much.

First off, it goes without saying that seeing “Avengers: Infinity War” is a must before seeing “Endgame.” So spoilers for THAT film begin here. You’ll recall that at the end of the previous film evil tyrant Thanos (Josh Brolin) got his huge hands on all six infinity stones, snapped his fingers, and half of the universe’s population turned to dust including several important characters like, oh, Peter Parker, Dr. Strange, Black Panther, etc. It was a shocking and eerie ending and one doozie of a cliffhanger. The remaining Avengers – Natasha Romanoff (Scarlett Johansson), Captain America (Chris Evans), Thor (Chris Hemsworth), Bruce Banner (Mark Ruffalo) and Tony Stark (Robert Downey Jr.), among others- are left with their grief along with the rest of the world. It’s certainly a dour way to open a big budget blockbuster but this thing has certainly has enough emotion to spare. Tony and Nebula (Karen Gillan) are stuck in space. Of course they’re no better off than Scott Lang who we recall from the end of “Ant-Man and the Wasp” is stuck in the Quantum Realm. So the question is… will the rest of these melancholy heroes be able to find Thanos and somehow reverse the damage he has caused? Isn’t that the question of the day…

Oh you wanna know more? Fat chance. Technical merits are outstanding in the usual Marvel way. The visual effects are top notch. Thanos, as in the previous film, is one of the most impressive CGI characters ever put on screen and Brolin is fantastic as a character who could have easily been one note and boring. All of the performances from this mindbogglingly impressive cast are outstanding. Downey Jr. is particularly moving here. We’ve seen this actor play this role countless times, to the point where you’re almost sick of him. Almost. He is utterly fantastic here. And that’s probably because the writing from Christopher Markus and Stephen McFeely (who have written all the “Captain America” films and “Infinity War”) is exceptionally strong for this genre. Sure this is a “comic book movie” but it offers so much more. They are somehow able to juggle dozens and dozens of characters and not shortchange anyone. Alan Silvestri provides another powerful and moving score.

Does anyone really need to read a review of “Avengers: Endgame?” You know whether you’re going to see it. And you probably know whether you’re going to like it. It’s killing me that I can’t mention what 80s film this movie borrows heavily from and is even referenced a few times. But like I said the less you know… This movie was easily one of the most moving, sad, fun, action-packed, anxiety-inducing, cathartic times I’ve ever had at the movies. Big budget entertainment doesn’t get much better than this and this three hour epic goes by in a snap. It comes close to topping “The Winter Soldier.” Almost.  GRADE: A

Thank you, I have recently been searching for information about this topic for
abcya | hooda games