To Infinity and Beyond: The Mindbogglingly Ambitious “Avengers: Infinity War” Doesn't Disappoint 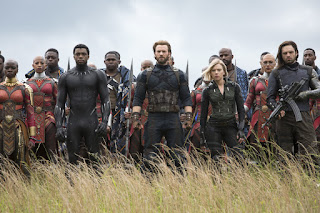 Ten years. It took ten years, but “Avengers: Infinity War” is everything Marvel fans have been waiting for. And it’s an altogether successful hodge-podge of the best things about the Marvel Cinematic Universe. Directors Anthony and Joe Russo took the daunting task of merging so many different characters and their worlds into one cohesive (for those who have been following along at least) saga and are pretty much completely successful. There’s not too much to offer viewers who are unfamiliar with the MCU; but that’s beside the point. “Avengers: Infinity War” works because of the decade-long foundation of great character building, creative storytelling, and compelling drama filtered through a geeky comic book sensibility. What we’re left with is a culmination of heart-pounding action, witty comedy, moving drama and, for the first time in the whole series, an actual feeling of consequence and finality for these characters we’ve come to love so much. Even 19 films in, there hasn’t been anything quite like it.

Recently in the last few years many of the Marvel movies have taken on their own specific identity. “Captain America: The Winter Soldier” was a political thriller; “Ant-Man” was a comedic heist film; “Spider-Man: Homecoming” was a John Hughes-inspired teen movie; “Thor:Ragnarok” was a campy, retro-styled gladiator epic; “Black Panther” was Shakespearean sci-fi drama. “Avengers: Infinity War” doesn’t quite have any specific distinction and that’s because it’s somewhat of a combination of multiple styles and genres. In fact, the entire film is essentially a setup to a disaster flick of galactic proportions. We’ve heard the name Thanos thrown around a lot for nearly ten years and even glimpsed him a few times here and there but finally he’s front and center and his mission is clear. Collect the six powerful “infinity stones,” that have driven the plots of many previous films, so that he can rule the entire galaxy.

Sure, the plot of the film is essentially watch big creature gather glowing CGI rocks, but it’s compelling stuff I promise. That’s because for the first time in the franchise’s history, it feels like there is some real weight and consequence to the actions of Thanos and his evil followers. It’s no surprise that not everyone will make it to the of the film alive; there are some truly heartbreaking moments here. Be prepared. But big character deaths are the only things driving the drama of “Infinity War.” Thanos who is the “father” of Gamora (Zoe Saldana) and Nebula (Karen Gillan) is the real star here. A complete CGI creation brought to live with verve by Josh Brolin, the film follows this villain as he comes face to face with our favorite super heroes.

The film is like watching a fine balance act that just doesn’t quit. At one moment the film has the warmth and humor of the “Guardians of the Galaxy” and the next we’re back to the bizarre wizardry of “Doctor Strange.” The film puts Earthbound characters like Spider-Man (Tom Holland) and Iron Man (Robert Downey Jr) into space as they all work together to attempt to stop Thanos from completing his colorful rock collection. There is scene after scene of either rollicking action, balanced humor, and moments of shock and awe as our favorite heroes face the one villain that actually feels unstoppable.

Writers Christopher Markus and Stephen McFreely wondrously weave together dozens of characters and never manage to shortchange of them. It truly is remarkable big budget filmmaking of the most refined kind. As refined as this sort of Hollywood filmmaking can be. “Avengers: Infinity War” is the magnum opus of the MCU; a real accomplishment from all involved. The film flies circles around the previous "Avengers" flicks; it's operating on a complete different plane that would make Doctor Strange proud. It’s a rewarding piece of pop culture entertainment that also functions as a sign of things to come.  "Infinity War" certainly is not all wrapped up in a perfect bow at the end; only the naïve would think so, but I sat wide-eyed (and teary-eyed) and I eagerly await the next ten years and beyond.  GRADE: A