The Cable Guy: The Hilariously Irreverent “Deadpool 2” is Another Marvelous Meta Romp 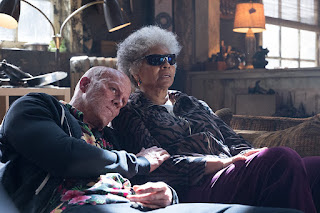 It seems like only yesterday I was complaining about “superhero fatigue.” Actually it was about 7 years ago when I wrote this in my “Captain America: The First Avenger” review: “I myself have found myself going through superhero fatigue.” What the hell was I thinking? That was way back when these comic book adaptations were sort of by the numbers and the MCU was still in its infancy. “The Dark Knight” and "Iron Man" were considered the epitome of comic book quality but they really just set the stage for what was to come. It’s now 2018 and not only are comic book films released nearly every other week, we finally have a sequel to the delightfully derisive “Deadpool.” While it certainly wasn’t the first graphically violent but comedic, kids-shouldn’t-be-watching-this, subversive super hero flick (there was “Kick-Ass” and “Super” to name a few but they weren't entirely successful) it was finally the first one released by a major studio to not take itself so seriously. “Deadpool” was somewhat of a surprise hit and I’m glad to report that “Deadpool 2” is arguably even funnier and meta-ier with so many funny gags and pop culture references you’ll either be giddy or completely sick of it by the end. I was giddy.

“Deadpool 2” ups the ante in terms of literally everything. More characters. More fun. More jokes. More violence. And so many great song choices. No seriously, this thing has an amazing soundtrack. Don’t even look up the soundtrack album before you see the film, you’ll want to be surprised (I’ll just describe it as super fabulous). And let’s just say there’s an Oscar-worthy original song performed by a popular French Canadian superstar. Enough hints.

Does anyone really care about the plot of “Deadpool 2?” I couldn’t really piece anything together from the trailers but there is actually a story unfolding here. Wade Wilson (easily Ryan Reynolds’ most iconic role), if you remember from the first film, is now a super-healing mutant covered with scars from head to toe. His alter ego is the wise-cracking, mercenary Deadpool and he’s living it up with his girlfriend Vanessa (Morena Baccarin); but after a series of unfortunate events, Wade ends up at the X-Men’s mansion and back with old frenemies Colossus (voiced by Stefan Kapicic) and Negasonic Teenage Warhead (Brianna Hildebrand). Eventually he forms a team with a gender neutral name (X-Force) which involves some of the films biggest laughs and cleverest bits (including standout turns from Zazie Beetz, Bill Skarsgard, and Rob Delaney). Meanwhile, a time-traveling cybernetic soldier shows up, no not that one; his name is Cable (played by Thanos himself Josh Brolin) and he wants to assassinate a teenage mutant named Russell (Julian Dennison). Wait, is this a Terminator film or what?

Ok enough plot stuff. This movie is just hilarious. The script is as meta as ever thanks to writers Rhett Reese and Paul Wernick (who also worked wonders on the first film) with Reynolds getting a credit this time around. I can’t even count the number of ingenious references. There’s everything from “The Passion of the Christ” to “Frozen.” And the film has a really fun time making fun of itself, and Reynolds himself, and the fact that we’re watching a comic book film. There are plenty of fun cameos too good to spoil here as well. Did I mention the soundtrack full of gay hits (seriously; Dolly, Cher, etc)?


I expected “Deadpool 2” to be great. But I didn’t expect it to be this great. A sequel is almost never as good as the first film because most sequels by their nature lack the element of surprise. But the filmmakers have improved upon the fantastic first film in so many great ways. The film feels fresh, has dramatic weight, and earns every fun twist and turn in the plot. The actors really sell the material and it feels like they’re having as much fun as the audience. The film is well-paced and offers plenty of fun action thanks to new to the franchise director David Leitch. 2018 is turning out to be a great year for superheroes. And no fatigue in sight.  GRADE: A-