Exploding Teens, Promising Young Women, and Borat, Oh My! The Best Films of 2020 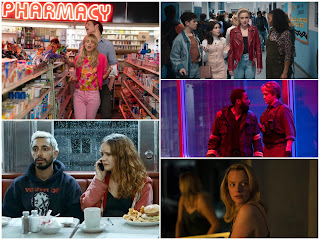 2020 was certainly an anomaly when it came to movies. Films got releases throughout the year but you had to sort of look extra hard to find the good stuff. But it was also easier than ever to gain access to a world of great movies from the comfort of your own home. I literally only got to see THREE movies in the theater last year. That is an all-time low for me. It’s bizarre to think that most of the films that got released this year were of the smaller, indie variety. There weren’t many big blockbusters and Tenet was really the only major studio film to get a full theatrical release in the midst of the pandemic. While overall I would consider 2020 to be a “weak” year there was an eclectic mix of fun stuff. So here’s my list of the best movies of 2020. Better late than never!

A delightfully savage, dark comedy about a woman seeking vengeance. It’s probably not quite what you’re expecting going into it. It’s not a violent exploitation flick. But is sort of has the aspirations to be one. It’s a lot of different movies rolled into one and really wowed me when I saw it. The film’s twisted script always kept me guessing and the outstanding cast of familiar faces is simply wonderful. Care Mulligan is magnificent and charming as is her onscreen chemistry with co-star Bo Burnham. Writer/director Emerald Fennell has crafted a simply exquisite piece of cinema that is feminist, dark, funny, tragic, and mind-blowing. I’ve watched this over and over again and I just wanna watch it again.

This was my favorite movie of the year until Promising Young Woman came along. Another feminist masterpiece this time the genre is flat-out horror. Another dip into Universal Monster well seemed like a bad idea at the time but this is unconnected to the disastrous Tom Cruise Mummy movie and instead is a wildly different take on the material. Elisabeth Moss gives a stunning performance as a gaslit woman who tries to escape an abusive relationship with a brilliant scientist who is able to turn himself invisible and drive her crazy. Frightening, with stunning special effects, sound design, and music score, The Invisible Man from Saw co-creator Leigh Whannell is another instant classic horror flick from the almost always reliable Blumhouse.

Watching this was a wonderful experience. I thought I wouldn’t relate to a story about a heavy metal drummer but I found this story to be extremely moving. Riz Ahmed gives a terrific performance as a heavy metal drummer who begins to experience serious hearing loss. The way director Darius Marder throws you into the situation with the main character is truly amazing. The sound design is terrific. The supporting cast is wonderful. This is a surprisingly emotional and kinetic watch.

Blumhouse does it again! Yet another body swap movie but this time with a horror bend. What a freaking delight this was. Director Christopher Landon who made the equally enjoyable Happy Death Day is firing on all cylinders here. Blockers’ Kathryn Newton is a high school girl who swaps bodies with a serial killer played by Vince Vaughn. Hilarity and gory deaths ensue! A wonderful script, characterizations, and a flat-out wonderful ode to the slasher genre highlight this silly romp and it’s pretty darn graphic. I think if we were in the “normal times” this would have been a HUGE box office hit.

Watching Tenet on the big screen was awesome. Christopher Nolan rarely fails to creative a wonderfully immersive cinematic experience. Another time-bending story with good guys and bad guys and the threat of World War III. Kinda sounds like 2020 in a nutshell.

I’m so happy to call this an Oscar nominated film. Dylan O’Brien stars in this sci-fi adventure about a post-apocalyptic world in which giant monsters have taken over the planet. Yeah is basically Zombieland with big bugs but it has a lot heart and humor to spare and one of the best onscreen duos of the year: O’Brien and his dog Boy. 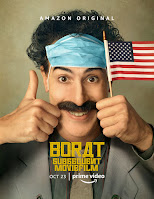 I love the Borat movies. I love how progressive and political they are even though on the surface they seem like silly frat house comedies. Sure a lot of the humor is gross and juvenile but it works. Sacha Baron Cohen is freaking brilliant and his young new co-star (and Oscar nominee!) Maria Bakalova is just as hilarious. The fact that they were able to make this during the pandemic and weave that into the storyline is absolutely bonkers and genius. I sat on my couch laughing hysterically at this and I’m not ashamed.

What a lovely film. The ultimate story of the American dream. A Korean family move to Arkansas in the 80s and dad Steven Yeun wants to start a vegetable farm must to the dismay of his wife. Meanwhile there is this delightful buddy comedy subplot going on between grandma (Youn Yuh-jung) and grandson (Alan Kim). Moving, gorgeous, simple, emotional.

A teen rom-com with exploding teens. It’s moving and horrifying. Think The Fault in Our Stars except instead of teens dying of cancer, they randomly explode without warning. This is actually a disturbingly relevant, covid-appropriate flick that is about fear of the unknown. There is even a whole sequence in which the teens are quarantined. Love Simon’s Katherine Langford and Charlie Plummer make wonderful, charismatic leads. This movie is a punch to the gut.

If you told me that I’d have a DC movie on this list and no Marvel movies I’d call you crazy. But here we are. Birds of Prey, featuring a wonderful cast of great female actors kicks ass and is a candy-colored feast for the eyes. Margot Robbie is fantastic as Harley Quinn and she will make you want a bacon, egg, and cheese sandwich like NOW. This is definitely one the most flat-out fun DC movies.

11) Judas and the Black Messiah

A great and powerful movie about Black Panther party chairman Fred Hampton and his friend who is actually an FBI informant. Sort of Malcolm X meets The Departed. This movie has two fantastic central performances from LaKeith Stanfield and Daniel Kaluuya who were both deservedly Oscar nominated.

Another winning, existential Pixar gem about an aspiring jazz musician who learns a life lesson after dying.

A delightful lesbian Christmas rom-com with characters who always don’t make the right decision. In other words, it’s relatable.

A cute Irish import about two outcast teens who fake a straight relationship to ward off the bullies.

I enjoyed this entry in the “based on a true story” political docudrama entry.

Horrible people, doing horrible things and yet so enjoyable to watch. Rosamund Pike is wonderful.

A breathtaking, panic-inducing (and ultimately tragic) long take opens this heartbreaking and hard-to-watch flick about the pain of grief. I never want to watch it again.

Melodic tale of a woman embracing the nomad lifestyle; filled with local, non-professional actors. Beautiful and meditative, but as someone who loves technology and my possessions, hard to relate to.

Say what you want about Ryan Murphy and his garish production this was an absolute blast to watch.

Circus of Books (on Netflix!)

All In: The Fight for Democracy (on Prime Video!)

Totally Under Control (on Hulu!)

This is such a great resource that you are providing and you give it away for free. I love seeing blog that understand the value of providing a quality resource for free GBWhatsApp

Thanks for the detailed article on this topic. I would like to see more such awesome articles from you.

I appreciate your work and knowledge. I will recommend this blog to others, more people will get the information and help. For the best quality information and quick updates. ipl tickets 2022

Your post is helping me a lot. Its really nice and epic. Thanks a lot for the useful info on this topic. You did it so much well. I love to see more about GB WhatsApp. Keep sharing and updating. Also share more posts with us. Thank you.

Thanks for the great article and post!fendi replica Replica J'ADIOR Handbags

Frederick Wiseman, one of America's most noteworthy, most liberal recorders, brings you into Boston's City Hall, where people assist with making a city and a majority rules government work.