Here Comes the Sun: The Disturbing and Gorgeous “Midsommar” is a Cult Above the Rest 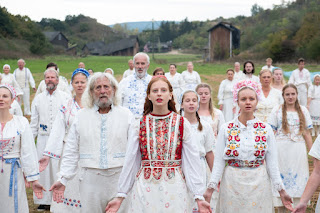 Halfway through Ari Aster’s “Hereditary” I thought I’d never be able to watch it again. I found it that disturbing, troubling, and creepy. As it turns out, it’s a hell of a horror film and has tremendous replay value once you know its secrets. Featuring an Oscar-worthy Toni Collette, it marked one of the most auspicious horror film debuts in quite some time. And now we have “Midsommar,” Aster’s incredible followup. Folks, he’s two for two. This sun-drenched ode to folk horror films like “The Wicker Man” is a distressing piece of art that, even at a runtime of 147 minutes, flies by because it gets its hooks in you in the film’s shocking opening sequence and never lets go. Essentially a drama about the dissolution of a relationship, “Midsommar” offers gorgeous, colorful cinematography, strong performances, and a story that is creepy and gross because you know exactly where it’s going and it’s one scary trip.


The film begins with a terrible tragedy during the cold winter months which easily establishes director Ari Aster as a grief horror master. Our heroine Dani (Florence Pugh) is the one dealing with shocking events that involve some immediate family members which is not helping her already strained relationship with her emotionally distant boyfriend Christian (Jack Reynor). To help get her mind off things, he reluctantly invites her along with his male friends Josh (William Jackson Harper) and Mark (Will Poulter) to visit Sweden. They have plans to do one of worst-sounding things in horror movie history. They’re going with their Swedish friend Pelle (Vilhelm Blomgren) to visit the Swedish commune his grew up on to witness a nine day long summer festival that only occurs every 90 days. If that doesn’t scream murderous cult I don’t know what does.


The rest of the film is a downward spiral of drug hallucinations (oh college kids!) and more and more disturbing behavior as these young people realize that the nice pale people even with their flowing white frocks and sunny, friendly dispositions are actually pretty darn insane. None of this is actually surprising, as the walls of the building in which our American heroes are bunking actually depict a lot of the crazy activities the audience will witness from these Swedish meatballs. Of course the less you know about the film going into it the more “fun” it’ll all be. But prepare yourself from some really shocking imagery whether it be graphic violence or graphic sexuality.


To be fair, “Midsommar” is certainly not a film for everyone. If you could handle “Hereditary” you could easily handle this. Think of “Midsommar” as brighter-looking version of “Hereditary” but without all the supernatural stuff. All great horror films have a centered piece of drama in which to hang the horror elements on and both of these brilliant films are the epitome of that. Aster has created yet another beautiful, trippy film set in a place where it never gets dark which means there’s never anywhere to hid. The film will not shock you with jump scares, but will slowly try to make you go insane, and what is scarier or more fun than that?  GRADE: A