Head of the Family: The Bonkers “Hereditary” is a Disturbing Portrait of Familial Distress 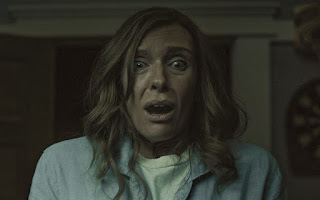 Rosemary’s Baby. The Exorcist. The Shining. The Conjuring. Hereditary. You see where I’m going with this? Supernatural horror fans will absolutely delight in the mounting dread that is the new indie creep fest known as “Hereditary.” The film is all at once utterly realistic and borderline ridiculous - sometimes at the same time - as it follows the downward spiral of a seemingly average American family. “Hereditary” slowly builds with realistic, emotional drama with punctuated moments of pure shock that make the moments of horror all the more impactful. The film is a searing tragedy about the horrors of loss and grief and morphs into horror of a different nature. It’s destined to be a modern genre classic.


The film begins with the death of a family matriarch; she was estranged from her daughter Annie (Toni Collette), her son-in-law Steve (Gabriel Byrne), and her grandkids Peter (Alex Wolff) and Charlie (Milly Shapiro). Annie, who works as a miniature artist, making the creepiest dollhouses known to man, doesn’t seem to be too upset by the loss of her mom and the film takes its time letting you in on the dynamics of the family. Peter is your typical movie teenage boy; he spends his time with friends and getting high. The youngest, Charlie is an odd little child. Too odd. Annie insists that Charlie was the only one her mother Ellen latched onto for reasons seemingly unknown. With Ellen gone, it’s not long before weird things begin to happen. Eventually the rug is pulled out from under us and the characters.

Boy oh boy do things happen. And why would I spoil them for you? A proper analysis of the film isn’t possible without getting into specific plot elements so I’ll just focus on the more generic positives the film offers. And that would be: Toni. Collette. She’s simply sensational here, going through a full range of emotions and being someone we easily identify with. She’s the heart and soul of the film and she’s Oscar-worthy. There’s a moment during an awkward family dinner that is a standout moment; it’s her Oscar nomination reel. The other performances are all top notch, especially a scene-stealing Anne Dowd (when doesn’t she steal every frame of every thing she’s in?).

First time feature director and writer Ari Aster works wonders building almost unbearable dread. When THAT THING happens, without warning, I was altogether numbed, shocked, and drawn in further. His script is as twisted as it is twisty. You’ll never be able to see where exactly the film’s headed. The shocking imagery he presents us is, in word, unforgettable. “Hereditary” is filled with the sights and sounds nightmares are made of including pristine camerawork and a fantastic, dread-inducing store from Colin Stetson.

“Hereditary” might be called “boring” or “slow” by some. In fact, those are the words I’d use to describe “The Witch.” This film is not dissimilar to that other slow burn of a film except the modern setting and story here are way more relatable and emotionally engaging. And more happens. The film feels more satisfying and unsettling and will certainly be worthy of repeat viewings; I can’t wait to see what this filmmaker does next. “Hereditary” will creep up on you and then creep you out.  GRADE: A