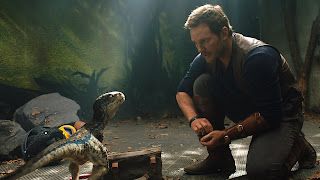 Well the good news is that “Jurassic Park III” is no longer the worst movie in the franchise. I actually like the third “Jurassic Park.” The latest entry in the “Jurassic Park” series (the fifth overall and second in the “Jurassic World” spin-off; confused yet?) is so utterly ridiculous you can’t help but laugh out of spite. Sure it’s not the first entry to introduce crazy ideas (communicating with raptors, training raptors, etc) but this new film is such a far cry from what made “Jurassic Park” such a phenomenal and believable sci-fi thriller. Nothing in “Fallen Kingdom” makes even a remote lick of sense. The story, which is all over the place, goes completely off the rails and introduces completely bonkers plot elements in a franchise filled with enough bonkers plot elements. I could somewhat buy training raptors; I will, however, not buy the loony bin that is this franchise’s latest excuse for a sequel.

“Jurassic World” had the benefit of being about a dinosaur park that actually opened to the public. It worked in a cheesy “Jaws III” disaster flick sort of way. “Fallen Kingdom” is a disaster of a whole other level. You’ll remember Claire (Bryce Dallas Howard) the perky, uptight park operator from the last film who rekindled her relationship with hunky raptor trainer Owen (Chris Pratt). Well now they’re estranged again and she’s an animal rights activist who sees the dinosaurs –who killed all the guests who died on her watch—as precious, endangered misunderstood creatures. So a rich guy in a suit gives her money to travel back to the island with Owen to rescue the man-eating monsters from the active volcano that threatens to wipe out all the remaining dinosaurs on the abandoned island. How could anything go wrong with that plan?

Since the trailers basically give away a majority of what goes on in the film, it’s no secret that some dinosaurs may or may not find their way to a place that isn’t Isla Nublar. “The Lost World” did it. A T-rex stomping around San Diego was ludicrous in 1997 so the writers had to up the ante in 2018 obviously. Even Steven Spielberg had a hard time really selling that plot point but he made it work well enough. It’s obvious now that writers Derek Connelly and Colin Trevorrow are responsible for the crazy stuff in “Jurassic World” while Amanda Silver and Rick Jaffa added a touch of class and humanity to the previous entry. Only Connelly and Trevorrow are credited this time. New to the franchise director J.A. Bayona is a good filmmaker. See “The Orphanage” and “The Impossible” if you don’t believe me. He offers some fine and weird directorial flourishes and there are some decent set pieces here but there’s not much any filmmaker could do with such a bizarre plot that desecrates everything that was simple and streamlined about Spielberg’s 1993 classic.

“Jurassic Park: Fallen Kingdom” is an unfortunate downgrade for this popular franchise. Everything that made the last film at least fun and charming, like the park itself, are now gone. There’s a serious dearth of interesting characters (Pratt and Dallas Howard are fine but everyone else is forgettable). The filmmakers make too many of the same bad decisions that plagued the other Jurassic Park sequels (like more dinosaurs=good and unnecessarily dark moments). And the ending is literally eye-roll inducing. Despite this, I do believe we’re in another golden age of blockbuster filmmaking. The Marvel films and other big budget franchises have proven that just because you have a big budget and a strong fan base doesn’t mean you can’t make a smart piece of pop culture entertainment. This isn't it. Though I'd take dinosaurs over fighting robots any day of the week. GRADE: C-