The Aristocats: “The Lion King” is Fine But It Whimpers When It Should Roar 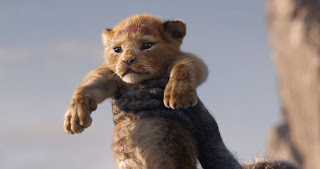 About 2 minutes into the “live-action” version of “The Lion King” I muttered, “I feel like I’m watching the Psycho remake.” Ahh, the Psycho remake, Gus Van Sant’s $60 million ill-advised experiment that continues to fascinate me to this day. That movie was the result of “What if we shot Psycho in practically the exact same way but in color instead of black and white?” And twenty years later we got the same question, “What if we took the global phenomenon ‘The Lion King’ but instead of having lush, colorful animation we made it with photo-realistic CGI animal characters whose faces can’t fully emote because they’re supposed to be ‘realistic’ so it just looks like they’ve all had botched face-lifts?” And here we have “The Lion King,” a ‘live-action’ remake of a traditionally animated film that feels inferior in almost every possible way (with the possible exception of the depiction of Timon and Pumbaa). Here’s the deal: if you liked “The Lion King” you’ll probably like the new version because it’s essentially the same thing. But there are alterations that make you wonder why they even bothered in the first place. Like the “Psycho” remake, we’re left with what is essentially an expensive experiment that’s actually an inferior version of a film that didn’t need updating in the first place.


Generally speaking, remakes don’t really bother me the way they do some people. Making a photo-realistic version of “The Lion King” was something I saw coming years ago. “The Jungle Book” and its Oscar-winning effects made that pretty obvious. I don’t hold “The Lion King” up to some pinnacle of animation standards by any means, but there is something special about it. That something special feels a little harder to find in Jon Favreau’s CGI extravaganza. The opening sequence – with various animals traveling the African landscape to the tune of “Circle of Life” – is pretty much a shot-for-shot redo of the animated version. It’s impressive what the computer animation wizards have been able to accomplish here. And then the story follows the young lion cub Simba (voiced by JD McCrary) as he learns about the circle of life from his father King Mufasa (voiced yet again by James Earl Jones). Meanwhile, Mufasa’s jealous and evil brother Scar (Chiwetel Ejiofor) plots his death and plans on ruling the African Pride Lands himself.


You know the story. It’s simple but effective and there’s a reason why it worked so well so many years ago and still does. Loosely based on William Shakespeare’s Hamlet, the film has a dramatic heft that a lot of other animated films have attempted to replicate. Watching “The Lion King” made today, it feels more of an allegory for the rise of the evil Trump Administration more than anything. Scar is a classic Disney villain and like all the good ones was perfectly evil and flamboyant. This newly rendered Scar is purely evil and sorely lacking in the not-so-subtle queerness that permeated the original character. Here, he doesn’t even really get a fully realized heinous villain musical number. Things improve greatly once Simba is exiled and meets up with the meerkat Timon (Billy Eichner) and warthog Pumbaa (Seth Rogen) who can easily be read as an outcast gay couple banished from the conservatism of Pride Rock. IT’S FREAKING CALLED PRIDE ROCK THOUGH. But I digress. The less said about the “photo-realistic” animals’ lack of genitalia the better. But back to Timon and Pumbaa. They are hilarious! Timon’s updated dialogue is fantastic and has that perfect Billy Eichner touch. I laughed out loud several times while the jokes mostly went over the rest of the audience’s heads. I’ll credit Jeff Nathanson’s script for that good stuff.


Odds are you know if you’re going to like “The Lion King” or not. Generally speaking. I enjoyed it actually; the songs are still good and the story still entertains decades on. Does this movie need to exist? Of course not. The CGI is pretty impressive but the character’s facial expressions are never quite as expressive as in the original film. The new iteration is almost practically devoid of bright colors which is why scenes like “Can’t Just Wait to Be King” sort of fall flat here. Overall this is actually one of the more successful remakes of the Disney animated classics. Bonus points for having actual people of color voice African characters and the fact that Pumbaa actually gets to say the word “farted.” This new “Lion King” is PG after all. GRADE: B-