Hello, Dolly! The Jump Scares are in Full Force in “Annabelle Comes Home” 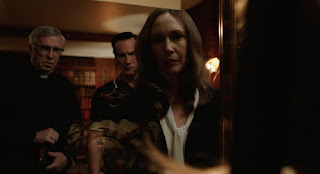 Talking and/or killer toys are having a bumper crop at American theaters this summer huh? “Toy Story 4” and “Child’s Play” both opened on the same day (major props to the “Child’s Play” marketing people by the way) and now we get the third installment of the Annabelle series which itself is a spinoff of the far superior fright flick “The Conjuring.” I greatly admire Warner Brothers’ Conjuring universe not only because it’s arguably better handled than their DC universe but there hasn’t been such a fun group of shared horror films since the days of the Universal Studios monsters. That being said, the “Annabelle” films pale in comparison to the main Conjuring films but this third entry is certainly a noble effort (as was the superior second installment “Annabelle: Creation”). What is essentially a single setting haunted house flick with things that go bump in the night, the film is fine entertainment for those seeking fun jump scares, but hardened horror fans with iron constitutions will find most of “Annabelle Comes Home” to be little more than silly smoke and mirrors that add very little to the genre; except for a handful of other fun possible Conjuring universe spin-offs. At the end of the day, I’m okay with that because there’s nothing particularly horrible about this entry, it’s just not overly outstanding.


The Warrens show up in “Annabelle Comes Home” and is set mostly in their home and that is certainly a bold and wise choice from the filmmakers. The presence of Vera Farmiga and Patrick Wilson easily elevates this otherwise generic haunted house movie. This is literally the fourth time that we’ve been made aware of the evil doll Annabelle and we finally get to see what happens when the Warrens place her in her permanent home in their creepy artifact room IN THEIR HOME. Of course during one weekend away from home, the Warrens’ hire a teenager to babysitt their young daughter Judy (Mckenna Grace). The sweet teen left in charge, Mary Ellen (Madison Iseman) hesitantly lets her friend Daniela (Katie Sarife) over and before they know it they’ve awoken Annabelle and all the other evil spirits locked away in the room in what is essentially a cabin in the woods storyline.


So basically what we have here is “The Conjuring” meets “The Evil Dead.” Which sounds fine on paper except that in this film I never really felt that these girls were in any real danger. I was pretty certain they would all end up fine. If you watch the first “Conjuring,” which is better written and features more fleshed out characterizations, film you never feel like that family is going to make it out alive. “Annabelle Comes Home” has a lot of boo/gotcha moments which is fine, but that’s really all it has. It has not real unique visual identity and I don’t even remember the music score. The young actors are fine but it was hard to get invested or care about them, especially Daniela who is the one who unwittingly unleashes the demons when all she could of done is just as Lorraine to contact her recently deceased close family member.


As a horror fan, and lifetime resident of Connecticut, I’m so thrilled that these films exist. These Conjuring universe films are fine – they’re all starting to feel and look the same – but I’m glad these films are around to scare the pants off of kids whose parents probably shouldn’t be bringing them to see them. Though these films aren’t loaded with profanity, violence, or sex which is extremely rare for an R rated horror film. It means the films care a stricter rating because they are just scary; of course your mileage may vary. As far as I’m concerned these films only exists to cleans the palate between the main Conjuring films and my appetite is certainly whetted. GRADE: B-