The Fright Stuff: “The Conjuring” is So Good It’s Scary 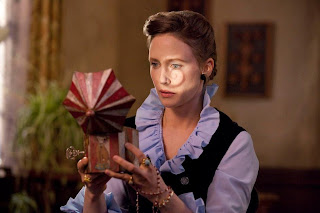 Horror isn’t the most reputable of film genres. Therefore it’s a great feeling when a horror film as good as The Conjuring comes along. Even if it borrows heavily from the movies that came before it, the movie feels like a breath of fresh air amongst others who give the genre a bad name. It’s a film that can arguably hold up against such classics as The Exorcist, The Omen, and Poltergeist. It has everything you could ask for in a great horror film. Not only is it wonderfully scary and intense, but it’s a well-made film in general. It features great acting, wonderful direction, a nice 70s style, and great sense of foreboding that peaks with a truly satisfactory, and disturbing, climax.


The Conjuring will hit home for those who grew up in and around Connecticut and those familiar with the paranormal investigators Ed and Lorraine Warren. This real life couple has spent a lifetime investigating the supernatural and giving lectures about their experiences. They’ve been witness to ghosts and spirits and demons and exorcisms. They have helped many, many people all over who have had “incidents” involving the supernatural. Whether you believe them or not is up to you. I however, truly believe that THEY believe in what they’re doing. The Conjuring follows Ed and Lorraine (played by Patrick Wilson and Vera Farmiga) in the early 1970s as they investigate a disturbance at a farm house in Rhode Island. It remains one of their most intense, and not talked about, cases. Until now.


As the film opens, we get to see a case the Warrens investigated involving a haunted doll named Annabelle. Then the film starts like any other scary movie: the Perrons, a nice-looking family moves into a new creepy old house. But they weird things begin to happen, like all of their clocks stopping at 3:07 AM. And things begin to go bump in the night and even during the day. The mother Carolyn (Lili Taylor) begins suspecting something is wrong while playing a game of Hide and Clap in the house with her youngest daughter. Let’s just say the clapping sound she hears isn’t from her daughter. Soon things begin to get so out of control Carolyn and her husband Roger (Ron Livingston) seek out the Warrens for help. It is here that the Warrens’s storyline and the Perron’s storyline finally come together. And the best part is that you’re not quite sure where the movie is going.


There are so many great things to say about The Conjuring I’m not quite sure where to start. First of all, one must admire the film’s great sense of 70s style. Sure it gets the wardrobe and setting just right, but the cinematic choices employed by director James Wan (“Saw” and “Insidious”) is simply too delicious to ignore. There’s a great long take tracking shot straight from a PT Anderson film. There are many zooms which is a staple of 70s filmmaking. Heck, even that famous Vertigo shot that Spielberg used in Jaws makes an appearance. It’s a wonder ode to the 70s when Hollywood American filmmaking was arguably at its creative peak.


The acting is terrific. Farmiga has undeniably become one of my favorite actresses to watch. Her work here as Lorraine is simply exquisite. Unfortunately it’s most likely too subtle to receive much awards notice, but watch her and you’ll be amazed. She works so well with Wilson you’d think they were a real couple. Taylor is simply sensational too. There is much required of her character as the movie progresses and you really get the sense of fear and anxiety that comes with so much trauma. The girls who play the Perron child are all excellent.


And the film is scary. You can’t really complain when a film is so great at making you feel completely rattled to the bone. I’m not quite sure the film was as scary as the first Paranormal Activity or even Insidious, but the film has some truly effective chills and none of them ever feel cheap or forced. Wan creates a genuine sense of fear, not false scares. It will therefore most likely be as scary on a second viewing. The special effects employed here to scare you feel real. It seems most of the effects are practical and while the film is rated R it’s never all that graphic. Apparently the MPAA just found the film just too darned scary. That’s pretty awesome.


I can’t quite say enough good things about The Conjuring. The film, written by Chad and Carey Hayes who have come a long way from the House of Wax remake, is a wonderful little mystery as well. It’s stylish, suspenseful, creepy, and has really great characters (who rarely do stupid things) that are brought to life by equally great actors. The effects are pretty great, with minimal CGI, and the sound design really adds to the creep factor. Whether you’re a fan of the horror genre or love haunted house thrillers or are curious about the Warrens getting the Hollywood treatment, you’d be doing yourself a favor to check out The Conjuring. It’s not quite all that groundbreaking and there are plenty of movies that have come before that it owes to greatly, but it just does everything right. It’s one of the best scary movies in years. It might even be one of the best movies of the year. Scary indeed.  GRADE: A