The College Years: “Monsters University” is Solid Fun If Not Particularly Pixar’s Best 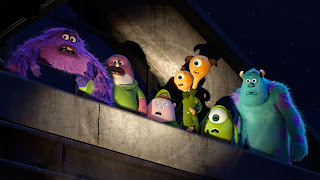 I wasn’t much impressed with Pixar’s last two efforts “Brave” and “Cars 2” so I went into “Monsters University” with some trepidation.  It’s a prequel to the 2001 hit “Monsters Inc” which was never really one of my all time favorites though a recent viewing confirmed that it’s a solid Pixar film. “Monsters University” will mostly delight those who love Pixar because it features some truly memorable characters, fantastic animation, and an enjoyable if not altogether original story. The film follows the early years of Monsters Inc “scarers” Mike and Sully as they traverse through the wild world of college life. It’s essentially Pixar’s answer to “Old School” or “Revenge of the Nerds.” Never has there been a more family friendly depiction of college life. Though those red Solo cups do make their requisite appearance for those who are curious.

The film begins with a grade school aged Mike Wazowski on a class trip to Monsters Inc. His class is learning about how the employees use their scaring skills to harvest children’s screams which power their entire monster world. Mike instantly dreams of becoming a “scarer.” Years later Mike (now voiced by Billy Crystal) heads off to Monsters University as a scare major. There he first meets Sulley (John Goodman) a cocky goofball who is riding the coattails of his popular family name. Sulley and Mike certainly do not hit it off right away and actually get in serious trouble with the intimidating Dean Hardscrabble (voiced with pleasing menace by Helen Mirren). They’re on the brink of being tossed out of the program but devise a plot to stay in. Mike, along with a team of loser monsters, will have to compete in the annual fraternity-run Scare Games. If his team wins he gets to stay in the program, if he loses he’ll be kicked out of Monsters University.

From here on out the film takes on all the tropes and clichés of a typical college comedy without any of the gross-out parts. Of course the film is smarter than most of those movies and so it has fun playing with your expectations. The film’s real highlight, however, is its truly memorable new characters. Art, voiced by Charlie Day, for instance is a delightful fury goof, who essentially looks like a crazy muppet. Then there’s the two headed monsters named Terry and Terri. Pixar’s character design is simply magnificent. The animation is simply stunning and with each film gets more and more realistic yet remains obviously computer generated. And the film really recreates the magical chemistry created between Goodman and Crystal. It’s fun to see how Sulley and Mike went from being rivals to becoming friends. Even though we mostly know how everything will eventually turn out, the film’s script takes enough detours to keep everyone on their toes.

There’s nothing overwhelmingly amazing or groundbreaking about Monsters University, it remains a funny, easily digestible, and entertaining, if unnecessary, piece of animated fun. And although the animation is stunning and the character design is pretty amazing, this doesn’t reach the high standard set by the Toy Story films or Finding Nemo; not even the brilliance of Disney’s Pixar-less “Wreck-It Ralph.” It’s certainly a much better effort than the dreadful “Cars 2.” But let’s all hope that Pixar has run the gamut of sequels and prequels (though Finding Dory could be promising) and sticks to original content from here on out.  GRADE: B+
Posted by Chris at 5:42 PM