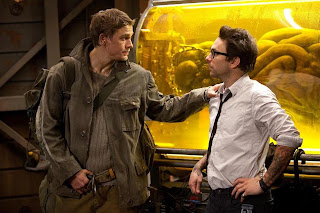 Those who are sick of Michael Bay’s “Transformers” films can breath a sigh of relief. “Pacific Rim” is nothing like the mechanical, headache-inducing blockbuster series that has gobbled up the world’s collective cash. Sure there are giant robots and there’s lots of loud action, but “Pacific Rim” achieves a level of greatness and sophistication Michael Bay will most likely never match. As directed by cult favorite Guillermo del Toro, “Pacific Rim” tells of a future in which giant monsters begin appearing through a portal on the ocean floor, poised to attack and rid earth of human life. If it sounds like something you’ve seen before you’re absolutely right – and yet the film, which isn’t based on anything, feels like a breath of fresh air. It has its inspirations (like Godzilla and other Asian influences) for sure and sort of hits all the standard sci-fi action notes, but there’s something so decidedly breezy and enjoyable about it any flaws can easily be forgiven.

Unlike most summer blockbusters the film has no real movie stars. The film stars Charlie Hunnam from TV’s Sons of Anarchy devoid of biker tattoos and a greasy beard. Hunnam is Raleigh Becket who is a decorated Jaeger pilot. Jaegers are massive robotic machines designed to fight the giant monsters that have begun creeping up from a mysterious portal on the ocean floor. A previous tragedy has forced Raleigh to lay low, but he’s lured out of retirement by Commander Stacker Pentecost (Idris Elba) after even bigger versions of the monsters – referred to as Kaijus – begin appearing at an alarming rate. The plan is to destroy the portal with a nuclear device. I love the concept of the Jaegers and how they operate. They’re piloted by two people whose minds are linked by a neural connection. Charlie Day from It’s Always Sunny in Philadelphia provides a little comic relief as a hipster scientist who studies the creatures and discovers a way to link the human mind with that of the Kaijus.

The film begins wonderfully by showing us how the monsters first arrived and all of the eventual steps that were taken as the world banded together to help fight them. The creatures have been attacking for years and the bulk of the film takes place towards the end of the overall conflict. And it’s a credit to del Toro for creating such a fascinating future world. The production design is outstanding. Take for instance the sequence in which Day’s character goes to Hong Kong in search of a black market Kaiju brain. The colors and set design are weird and outstanding. Ron Perlman blends into the strange surroundings with a nice juicy supporting role here as the intimidating Hannibal Chau who deals in trading illegal Kaiju parts.

The bulk of the story, however, features lots of fighting sequences in which the creatures show up to destroy humanity while being fended off by the giant Jaeger machines. These scenes could have easily become tedious and repetitive. They aren’t. While they’re cut together in the usual fast action spectacle way, I was never quite confused as to what was happening. Most of the scenes take place at night and in or near the ocean but the darkness never seemed to prohibit my ability to enjoy these sequences; though I was wise to choose the 2D option.

I really loved everything about “Pacific Rim.” It has all the standard summer action movie elements we’ve seen before yet they’re all presented in a much more tolerable way. There’s no forced romance – though there’s a clear connection between Raleigh and his new female Asian Jaeger co-pilot played by Babel’s Rinko Kikuchi. Sure there’s an unnecessary Top Gun-esque rivalry between Raleigh and an Aussie colleague. But there certainly isn’t that annoying trademark Michael Bay glamorization of the military that has grown so tiresome in his films. And ok I can’t say the film’s ending held any real surprises. Though, to be honest, I wanted to cheer. But everything else about the movie was so right. The score is memorable, the effects are great, the story flows nicely, it doesn’t feel overlong, and del Toro (who is a co-writer with Travis Beacham) adds a perfect sense of foreign strangeness to the whole thing that just isn’t possible with an American director. “Pacific Rim” is a monster movie that delivers the goods.  GRADE: A-
Posted by Chris at 11:25 PM