The Fears of a Clown: The Epic “It Chapter Two” is a Worthy Conclusion 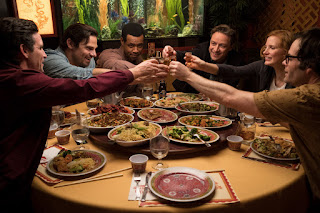 Let met get this out of the way first: yes “It Chapter Two” isn’t as “good” as the first movie; but that’s if you’re really just inspecting both films under a microscope. Having said that, it’s still a great movie. Even if this second chapter is a bit long, the film is never boring and functions as a fantastic conclusion to what we were given in the first movie. Both films are terrific companions to each other and combined are five hours of one of the best horror stories modern cinema has seen in quite some time.

The main reason why “It Chapter Two” even works is because the casting of the adult actors is completely spot on. You truly believe that they’re portraying adult versions of the young characters we got to know so well in the first film. And I’m proud to say that I called – like many others I’m sure – the casting of Jessica Chastain as adult Bev before the first movie even ended. James McAvoy is the adult Bill now a novelist who struggles with his books endings. The death of his brother Georgie still haunts him. The hypochondriac Eddie (played by James Ransone) is now a risk assessor married to a woman who resembles his mother. The foul-mouthed, bespectacled Richie (Bill Hader) is now a stand up comedian who is apparently holding a dirty little secret. The once-chubby now-hot Ben (Jay Ryan) works as an architect. Isaiah Mutafa is the adult Mike who is the one of the gang who has stayed in Derry, Maine. As an adult, Stanley (Andy Bean) is married but after Mike calls the gang and urges them to return to Derry he takes his own life. Apparently the adult members of the “Losers Club” who battled the terrifying creature IT 27 years ago have forgotten about him but must return like they promised when the monster returns in modern day. And only Mike has the learned the definitive way to kill him once and for all.

The first film drew on 80s nostalgia and the camaraderie of pre-teen childhood in such a successful way that no continuation was every going to be quite as satisfying but “It Chapter Two” does a pretty outstanding job. The film is scary in its own way but it never is quite as terrifying because watching adults being attacked and scared is never as scary as children being attacked and scared. The film is more successful in really digging deep into the minds of the now-adult characters and how the events of their childhood has affected their lives. In fact, really the whole point of this saga is a commentary about fear and how childhood trauma affects adults and the general horrors of society. It’s not a coincidence that this second chapter opens up with a horrifying gay bashing topped off with the return of Pennywise (Bill Skarsgård) the evil clown that the monster usually takes the form of. Evil and hatred are a never ending cycle in our society and that’s juxtaposed with the return of It every 27 years.

Returning director Andy Muschietti’s film is just as well directed as his first entry with a creepy atmosphere and deliberate pace that is never boring. Gary Dauberman’s script may rely a little too heavily on jump scares to be truly effective but the its the adult actor’s performances that really sell the material. I truly believed that these adults were extensions of their youthful counterparts. And we still get to see parts of the preteen actors in flashbacks with all the young actors from the first film along with some digital trickery.

“It Chapter Two” is certainly the more ambitious entry but it also feels more epic and works as a worthy conclusion to this story. The first film works wonderfully on its own, but the second film opens it up and is able to give us something more. It’s fascinating seeing the how the events of the first film have affected the characters as adults and seeing them go back to their hometown to deal with the demons of their past. The final act may go on a bit too long but it’s emotionally engaging enough to make it worth the long the journey. And I’d be lying if a tear or two wasn’t shed by the end.  GRADE: B+