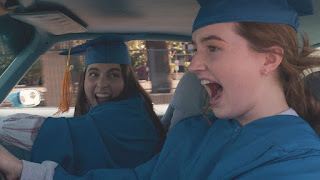 “Booksmart” is raunchy, progressive, and funny. What more could you want in a comedy? Olivia Wilde, making her feature film directorial debut, imbues the film with equal parts heart and weirdness that makes it standout among raunchy teen sex comedies. The movie follows two straight-laced best friends on the eve of their high school graduation. When they realize that even their wild troublemaker classmates also got into ivy league schools they figure it’s time to let loose a little. A chaotic night of debauchery coalesces into a series of wacky misadventures as they attempt to locate the wild party being thrown by a classmate. “Booksmart” doesn’t necessarily reinvent the genre but certainly takes a fresh approach with equal doses of heart and hilarity.

“Booksmart” is not unlike the 2007 teen comedy “Superbad” in which three teen boys attempt to fit in by attending a wild house party. They certainly share the same DNA: Jonah Hill’s younger sister Beanie Feldstein stars here as the straitlaced Molly. And her equally prudish best friend Amy is played by Kaitlyn Dever. Molly is headed to Yale in the fall, and Amy is heading to Botswana for the summer for volunteer work. Amy had previously come out as a lesbian and has a crush on a skater girl named Ryan. After being teasing in the bathroom, Molly confronts her tormentors and tells them she’s going places because she got into a good college. But they inform her that they’re also going to good schools. And suddenly Molly has a revelation. Those kids partied in high school but also got into college. She makes it her mission to spend the night before graduation making up for all the fun stuff she missed out on while in high school. Amy is reluctant but goes along with it. Hilarity ensues.

The raunchy coming-of-age teen comedy is nothing new, but “Booksmart” feels special. The two female leads are, first of all, extremely likable and funny. I’m sure we can thank divine intervention for getting these two actresses onscreen together. You sense the lifelong friendship these characters have and you root for them. The fact one of them is gay and doesn’t necessarily conform to stereotypes is a pretty wild concept for a mainstream film about teenagers. The entire film is filled with diverse types of people. And everyone has a moment to shine including a scene-stealing Billie Lourd as Amy and Molly’s bizarre classmate Gigi who happens to pop up throughout the entire film.

The film is also refreshing because for once, it’s a movie about teenage girls whose plot isn’t driven by their need to be with a boy. There are love interests involved, yes, but that’s not what drives these characters. The film’s script comes from the minds of four genius women: Susanna Fogel, Emily Halpern, Sarah Haskins, and Katie Silberman. Their script is zany, emotional, funny, and most of all relatable. Wilde’s direction is gorgeous. One sequence set underwater in a pool is beautifully shot (as is the rest of the film) and it’s when I had an epiphany: that in a perfect world a film like “Booksmart” would be getting serious Oscar attention come the fall.

There’s always one great indie comedy that comes out every summer as perfect counter-programming to the loud, CGI spectacles that usually fill the multiplex. This is that movie. “Booksmart” is fresh and fun and has set a new standard for coming-of-age teen comedies.  GRADE: A