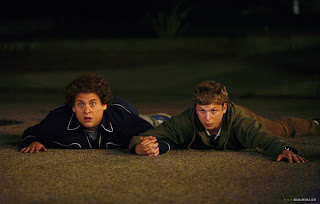 Some of the best comedies take place over one night or day. The granddaddy of spoofs “Airplane!” takes place during one wacky flight. “Wet Hot American Summer” is the last day in the lives of campers and their crazy counselors. “Adventures in Babysitting” transpires during a long evening of misadventures in Chicago. Even “Ferris Bueller’s Day Off” takes place in a day. I could go on forever and it’s possible that film historians have written about the merits of films that take place over a short period of times in the characters’ lives. There isn’t much time to show a character’s lifetime, but the best movies can develop a character within minutes with expert dialogue and some gut-wrenchingly hilarious scenes. “Superbad” from producer Judd Apatow is a guaranteed soon-to-be-classic of the teen sex comedy genre. You’ll be McLovin’ it.


“Superbad” is a rare specimen. It’s the rare comedy that has its heart in the right place along with its brain. Seth Rogen who you’ll gladly remember as the good-hearted doofus who got Katherine Heigl pregnant in “Knocked Up” co-wrote this with his friend Evan Goldberg. They allegedly wrote this script years ago and is semi-autobiographical in nature. And a reason this film works on the level of smart comedy is that there’s a bit of truth in nearly every scene. Director Greg Mottola uses actors who actually look like they’re about to graduate high school and geeky teens who actually appear to be geeky. And where on earth did they find that McLovin kid. He’s God’s gift to summer comedy.


Evan (Michael Cera) and Seth (Jonah Hill) are have been buddies since they were little (and both actors are in fine form). They’re both kind of geeky in an “oh look at those cute virgins” sort of way. Of course they aren’t prudes. The way they speak could make Howard Stern blush. Okay, maybe not, but you get my point. These boys’ mouths will offend most adults (within minutes of starting the boys discuss which porn website to buy a subscription to). And the point of their vulgar talk isn’t just to be funny and offensive. I believe this is how teenagers these days speak. And frankly the more teenagers talk about sex the less they actually do it. This is smart observation of the teenage experience disguised as dumb raunch. But for every bit of bawdy humor there is just as much humanity. This is also a film that is really more about male friendship than about guy & girl love. These guys are getting ready to move on in their lives and it’s a frightening and awkward reality.

The plot here is simple which includes their attempt to get their hands on booze for a girl’s house party. This entails many wild and unpredictable misadventures. They plan to use their friend Fogell’s (terrific newcomer Christopher Mintz-Plasse) new fake ID to score the alcohol. A robbery at the liquor store lands Fogell in the hands of two ridiculous cops played by Rogen and SNL’s Bill Hader. They love that this kid’s name on his ID is McLovin and decide to give him a ride home after they make a few police calls. Like all teen comedies the adults are always portrayed as inept loons and “Superbad” is no exception. These officers are straight out of “Car 54 Where Are You” and while they do provide solid laughs (mostly because they’re with McLovin) their scenes are so silly and unbelievable they’re almost from a different movie.

I think Mr. Rogen is having the best summer of his life. Everything he’s connected with has just the right doses of hilarity and humanity. This film almost plays like a prequel to “Knocked Up.” Now we know where the Ben Stone character came from. And whether Evan and Seth ever get to that party in hopes of losing their virginity is something I’ll never tell. This is the rare gem of a film that actually gets you to care about its characters instead of just knocking you over the head with humor. Although McLovin deserves a movie of his own. GRADE: A-