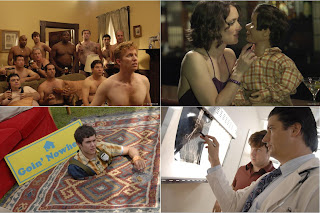 You have to love any film that mocks religion. Well “The Ten” doesn’t so much mock religion as much as it just acknowledges it with raunchy humor mixed in guaranteed to offend many. Frankly, this film’s audience is not going to be the likes of Mother Superior or Pope what’s-his-name. The true audience for this film is the small cult followers of the director David Wayne’s hilarious previous entry “Wet Hot American Summer.” That was an irreverent look at 80s camp comedies that was as subversive as it was funny. “The Ten” is an ode to God’s Ten Commandment’s one of life’s first countdowns. VH1, MTV and E! have a lot to owe the man upstairs and a really funny film to witness. Here I present to thee, “The Ten” a film chock full of funny bits that are mostly hit or miss.

The film’s structure is really simple. Paul Rudd introduces the film in front of two large CGI stone tablets with the list behind him. He introduces each segment but not before introducing us to a fight with his wife played by Famke Janssen. If anything, this is the weakest part of “The Ten.” Rudd is a funny guy (see Knocked Up, The 40 Year Old Virgin, heck even Clueless) but here his laughs are mostly scattershot and when the film comes back to him, we most just want to get back to the commandment segments. These segments rate on a scale of hilarious to funny to odd. But it’s always entertaining. But frankly, this film's slick production values don't really work as much as Wet Hot American Summer's low budget appeal.

It’s difficult to describe all of them and guess what there are ten! The first has to do with “thou shalt have no other Gods before me” and it revolves around The OC’s Adam Brody gaining a Christ-like following after becoming stuck in the ground after a skydiving mishap. Winona Ryder plays his overreacting, jealous girlfriend. Ryder also plays in another segment (as most of the actors do) regarding, you guessed it, “thou shalt not steal” in which she becomes obsessed with a ventriloquist’s dummy and must steal it to satisfy her love of, um, puppet love. Probably the most random vignette is for “honor thy father and thy mother” in which two black twins question their white mother about their white father’s paternity. She insists her sons’ biological father is none other than Arnold Schwarzenegger. The boys’ respond with “How does that explain the dark color of our skin?” That’s how random this movie is. The only real throwaway part is an unfunny animated sequence whose only highlight is seeing silly cartoon characters having sex.

The film really does work when it’s at its most random. The jokes are sometimes taken literally such as those black boys asking their mother to spell it out to them. And then she literally s-p-e-l-l-s it out for them. The dialogue is as smart as anything found in a ZAZ parody film. And why shouldn’t it be. Wet Hot American Summer worked as well as any spoof possibly could. David Wain and co-writer Ken Marino have crafted their film as an ode to the great sketch comedies of the past. “History of the World Part I,” “Kentucky Fried Movie,” and “Everything You Wanted to Know About Sex But Were Afraid to Ask” all are in fair play.

Wain has assembled such a great cast including Live Schreiber (who covets his neighbor’s goods), Gretchen Mol (uses the lord’s name in vain), Jessica Alba (as a homewrecker), Bobby Cannavale (keeps the Sabbath Day holy by hanging out naked with other guys), Oliver Platt (as a celebrity impersonator), Zak Orth (defending the thou shalt not murder guy), Rob Cordy (wants the thou shalt not kill guy as his prison bitch), Justin Theroux (plays a Mexican Jesus Christ) etc but it’s a little disappointing that “Wet Hot” alums Michael Showalter, Janeane Garofalo and Michael Ian Black just show up in minor roles. Molly Shannon and Amy Poehler are nowhere to be found but that’s ok. I say count your blessings and see thy film! GRADE: B