Season of the Kitsch: Rob Zombie Takes a Stab at “Halloween” 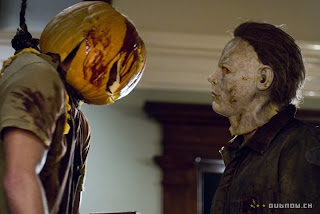 I will say this upfront: After much deliberation I’ve decided to give this film a letter grade of B-. This is technically one of my most difficult grades to give because I’m very torn. The original Halloween is my fourth favorite film of all time and watching a remake seems both appalling and intriguing. So therefore I must warn that fans of the original film are most likely not going to enjoy this version and fans of horror in general will find likes to like and dislike. Fans of director Rob Zombie will probably find this to be one of his most accomplished works, which of course, isn’t saying a whole lot.

It’s unfair to the new film to make direct comparisons to the original. Yet it’s an insult to the original for it to be completely ignored. So, having said that, I will try to be fair to both versions. But that really implies that this new film is a standard remake and it’s really not. It has enough new content to qualify it as a prequel. I appreciate Zombie wanting to go back to the beginning to make Michael Myers scary again, whether he actually succeeds, I haven’t really decided.

It’s part prequel part remake (pre-make? re-quel?) It’s really two short movies shoehorned into one and it doesn’t quite gel. Zombie expands the original film’s opening into half a movie that doesn’t really work. What makes “The Shape” (true fans know what I’m talking about) stand out amongst the Jasons and Freddys is that not knowing why he kills his sister when he’s eight years old is what’s so frightening. And this was at time in the sixties when crimes like this shocked millions. Today, we live in a society that continually breeds crime and violence (although it’s been awhile since we’ve had a well-known serial killer on the loose ala Bundy or Dahmer). So when we see little Mikey Myers kill his sister and several others it’s not completely shocking or particularly scary. We see little Mike’s (Daeg Faerch) grungy homelife. Sheri Moon Zombie plays his somewhat sympathetic stripper mom. And Mike not only kills is older sis, but her greasy boyfriend, and his stepfather as well. Oh yeah and he beats a kid to death in the woods. And we finally get to see Dr. Loomis (Malcolm McDowell) council little crazy Michael.

Zombie gets a few things right. I had heard awhile back that he wasn’t going to use Carpenter’s famously simply and creepy score. It’s been remixed here by composer Tyler Bates. The mask is finally a lot closer to what it looked like in the original film. And frankly the film is much better than parts 4, 5, 6 & 8. (I don’t even count part III and since I love post-modern horror movies like “Scream” I found “H20” to be completely enjoyable, if also completely ridiculous). Part II is definitely the best sequel because it’s most like the original. This “reimagining” seems more along the lines of “Halloween” meets “Hostel” in that the violence here unlike the original is very gratuitous. And I think every female character under 20 shows her breasts before being sliced and diced by the hulking adult Michael Myers (Tyler Mane) and dragged across the floor.

I enjoyed the nods to the first film. (“See anything ya like?” “Totally” Laurie still likes Ben Traemer) For a short time Michael Myers actually stalks and hunts instead of just killing everyone in sight. Laurie Strode (Scout Taylor-Compton) stops by the Myers house to drop off paperwork for her real estate agent father and she meets up with little Tommy Doyle who insists that the boogeyman is for real. Laurie’s oversexed friends Annie and Linda totally show up here as well. Laurie isn’t as much of a spazz as Jamie Lee portrayed her in the original (she doesn’t knit or dress like a 70 year old woman) and now she’s fitted with some hip new frames. Whether she’s as sympathetic as in the original, that’s up for debate. She’s still the undersexed virgin and her friends have been revved up into superslut mode mostly because by the time Laurie is introduced almost an hour has gone by. And Annie actually gets to do it with her boyfriend Paul before meeting her end.

It’s impossible to not compare this to the 1978 classic. I saw it when I was a little kid and I’ve never been the same person. Will this new Halloween do the same when it airs on October 31st on basic cable? I doubt it. Rob Zombie is an honest “Halloween” fan and who wouldn’t want to make the ultimate Halloween movie? While it’s not nearly as bad as the most unnecessary remake of all time (Gus Van Sant’s “Psycho”) Zombie’s film will blissfully fade from memory without any harm done. If anything there is a purpose for this film: it will make you appreciate the original even more. And as long as it as a reason for existing, that’s not really a bad thing. GRADE: B-

PS: Why does every male character in this movie appear like he’s about to attend a White Zombie concert with grungy shoulder-length hair? Oh wait, never mind.

PSS: If this is supposed to be a remake of the first film, why does Zombie still go with the horrendous Halloween II plotline of making Laurie Strode Michael’s little sister. Even Carpenter himself admits that was a lousy idea in the first place.

PSSS: And what I really don’t get is why little Michael Myers would choose to dress as a circus clown for Halloween when he walks around wearing a KISS t-shirt?

The circus clown thing, I think its called a "juxtaposition" or something like that... I hate to admit it but Rob Zombie did a much better job than I expected.

What was the last good horror movie you saw? (that wasn't a comedy)

Having read this I thought it was very informative. I appreciate you spending
some time and energy to put this content together.

I once again find myself personally spending a lot of time both
reading and leaving comments. But so what, it was still worth it!