Let’s Get Metaphysical: “The Nines” is Hardly By the Numbers 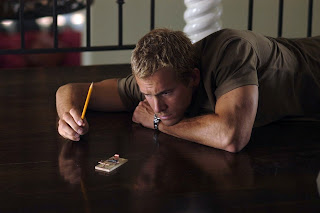 Note: This is an abridged review because I simply can’t remember enough of the film to warrant a full length review (I saw it awhile back in LA) It’s most likely never going to play anywhere else, but I advise looking for it when it’s released on DVD.

“The Nines” is guilty of one thing: Making a good actor out of Ryan Reynolds. Yeah Reynolds has had charm and a commanding presence in films prior, but he’s not exactly what you’d call a “serious actor.” But you’ll be surprised that he carries himself rather well in John August’s strange, philosophical and striking new film in which he plays three different roles which are, I suppose, all parts of a larger character, one that could possible be traced to…well why should I spoil the fun for you? I don’t want to give any secrets and that’s most likely because this movie is confusing and completely open to interpretation. It’s always interesting and entertaining if you don’t mind struggling to determine what this film is really trying to say.

Like I said earlier the acting is good, especially Melissa McCarthy who sort of plays a version of herself (she was apparently in the show Gilmore Girls, which is referenced in the movie). She’s outlandish and bizarre and delivers some delicious lines courtesy of August’s wickedly intriguing screenplay. He seems to be entering David Lynch terrirtory and that could be a good thing or a really bad thing. Hope Davis is also here playing several roles in the three separate acts that become more connected as the film progresses. And little Elle Fanning tries to out act her big sis in the typical "strange/wise child role."

While the film is a puzzle it’s never frustrating to the point of wanting to tune out. I can’t say this is something that is completely original ("Mulholland Dr." was an equally bizarre LA-set mind blower) but for your money why not spend your hard earned dough on a film that can make you think instead of one that will make you stupid? And besides, I saw this film very late at night and it kept my attention all the way through so that’s saying a lot. GRADE: B

Your website must supply a clear message using a goal-oriented
direction, setting you apart from your competition. Investors are
there to help you the entrepreneur and to gain a cash in on their investment from the entrepreneurs company.
" Employees at Nike are encouraged being curious and available to new ideas, whatever their source.

If you happen to be into gaming on your own personal PC, understand what it can manage.

One quote arrives instantly to mind when viewing
this topic. Nothing represents every day life much better than clash of clans
hack, and I mean nothing.

my page: clash of clans cheats

Thanks for sharing information :)