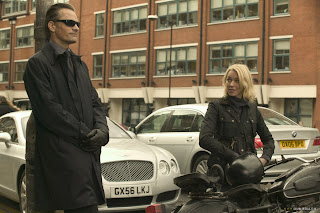 In one of David Cronenberg’s early films a man’s head explodes. We see the whole thing happen right on screen. This took place in the film Scanners. In that film, people who could read others’ minds (called ‘scanners’) were amongst those living normal, happy lives. The head explosion instantly came to mind while viewing “Eastern Promises.” No this film isn’t horrible and didn’t really make my head explode, but because I was such a big fan of “A History of Violence” I had to feel slightly disappointed. It’s just that I couldn't wrap my head around what was going onscreen in Cronenberg’s first foray into crime drama (assuming you don’t really count his last movie). Promises is probably the auteur’s most mainstream film to date and with strong echoes of movies like “The Godfather” it’s really hard to appreciate the filmmaker’s vision, when the whole time it’s really just giving me a migraine.

Eastern Promises works first and foremost because of the performances. Naomi Watts it’s a British nurse who delivers a young girl’s baby. The mother dies in childbirth, leaves behind a journal written entirely in Russian and Watt is instantly connected with the abandoned baby. She insists that her Russian born uncle translate the diary. She believes this young girl was troubled and somehow connected to the Russian mafia. Meanwhile, Viggo Mortensen, sporting a new do and terrifically dead-on Russian accent is the driver of a famed Russian mob family that called this little London town their home. The patriarch is Armin Mueller-Stahl who, like Marlon Brando in the 1972 mafia classic runs his family’s “business.” He owns a popular restaurant that is a front for the horrific crimes committed against other bad guys. Mueller-Stahl’s son Vincent Cassel is a creepy and intense mob guy who is always hanging out with Mortensen.

I really didn’t care too much for the film’s story. I don’t know a single thing about the Russian mafia (I didn’t even know there was a Russian mafia, let alone in England) so you can imagine my confusion. I don’t really dislike having to read subtitles but it does make a movie more challenging to follow. If these Russians are such bad people, that didn’t really translate well for me. I never really thought Watts was in harms way and Mortensen was way too nice if you ask me which affects something revealed about his character a little too soon. The film’s plot (written by Stephen Wright) is so tight that it couldn’t let me in on the fun. It seems like a film that was more fun to make than to actually enjoy.

Having said all that, this film has one of the best fight scenes in a movie in recent memory. The finale takes place in a bathhouse, with Mortensen taking on two baddies, while fully exposed if you catch my drift. The choreography is amazing that it appears this scene was never rehearsed. And it’s so well shot and edited that it makes all of the uninteresting stuff that came before it practically forgettable. This scene alone is worth the price of admission and is one of two really positives the film has (along with its Oscar worthy performances from all involved).

Cronenberg’s films are definitely an acquired taste. I’ve liked some of his films and disliked others. I’m one of the very few who likes it when he has to resort to gruesome special effects to scare the audience. There are violent images in this film but none compare to the images he has shown us in the past. While the film has enough positives to make it a recommendation some may tout 'Eastern Promises' to be as good as 'The Godfather' which is absurd enough to make your head explode. GRADE: B-

Hey, I ended up seeing this movie last night. Across the univeres wasn't playing in monrovia so I saw my second choice. I do agree that A History of Violence is better, but I loved Eastern Promises! I thought it was an excellent thriller and one of the best films I've seen this year. I'm not too sure what you found so confusing about it. There isn't even that much to the plot and It's like 10 times less confusing than The Godfather. It must have been the Russian accents. =)