Flop in the Name of Love: “Good Luck Chuck” is More Like Good Luck Schmuck 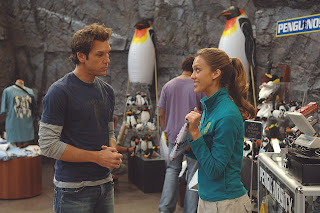 Okay, let me get right to the point. “Good Luck Chuck” is a bad movie and it’s mildly entertaining at best. I was able to get through it without much damage to my brain although most cinephiles will want to run screaming the other way. Don’t get me wrong, “Chuck” is pretty much the bottom of the comedy barrel, but you certainly could do a lot worse (here’s looking at you Chuck and Larry). Yeah it’s offensive, smug, unoriginal, unbelievable and mildly retarded, but still it has enough scattered chuckles to prevent you from committing suicide in your seat.

Don’t care about the story? Too bad here it is: Chuck (Dane Cook, who tries really hard to convince us he’s a dentist) is a cursed man. Some Goth girl cursed poor Chuck back in middle school. Every time he “gets with” a woman she goes on to find the man of her dreams. How is this really a curse? You’re correct, it really isn’t because by the film’s midpoint Chuck has bedded at least 34 beautiful women in various positions. This guy is so dumb he really does think he’s cursed. Oh wait I forgot, he sleeps with ugly fat women too. The poor guy, taking one for the team! All these women think of him as a good luck charm for they are destined to marry the man of their dreams after being with Chuck. Haven’t they heard of match.com? And what beautiful woman has to sleep with a goof like Dane Cook just to meet the man of her dreams? Oh who cares!

So Chuck realizes that this curse is going to get the best of him when he meets Cam (Jessica Alba, who tries really hard to convince us that she’s some sort of penguin scientist). Cam is a klutz for no apparent reason except to give us sporadic chances to laugh at Jessica Alba being hit on the head, running into polls, and smashing her face on the pavement. Oh and she electrocutes Chuck. Is any of this particularly funny? Not really. Chuck loves Cam but he can’t sleep with her or she’ll marry the man of her dreams. Well wouldn’t you think that if they were really meant to be together then they should just do it already and maybe she’d end up marrying Chuck? Of course not; these characters have a mild case of mental retardation so, instead, Chuck acts like a crazy fool and professes his love in rather psychotic ways like showing up at her work dressed like a penguin. How cute! Cam quickly labeled Chuck a stalker freak and refuses to see him. Aww shucks!

Most offensive of all is Chuck’s plastic surgeon friend Stu (Dan Fogler, who’s even more annoying than Jack Black) who is the epitome of misogynistic scum; and I’m not even a woman! Watching this character was like watching a puppy get run over by a garbage truck: something you never want to witness. This guy is hairy and fat and he makes fun of fat women? How does that make sense? This guy is supposed to be a ladies man and he gives women bigger breasts as part of his job. I think the writers were trying to spoof the “hot shot cocky sidekick” character but instead have made the movie worse than it really should have been.

Okay so I know I’ve been rather mean but it’s difficult not to be. I don’t want to pick on this film the way Stu picks on overweight ladies, but come on, this movie pretty much deserves it. I’ll admit I laughed here and there (the opening scene was pretty great, the rest was downhill) and if you take out that jerk character who makes Stiffler from “American Pie” look like Wally Cleaver, then you’d have a much more tolerable movie. This film relies too heavily on raunchy jokes and pratfalls. Well-made movies like “Knocked Up” or “Superbad” may be raunchy, but they feel organic and are never offensive. And those movies actually employ talent. Frankly, I would have given Jessica Alba’s role to someone with actual comedic skills (such as the underused Anna Faris) but what do I know. I’m just a lowly film critic. GRADE: C

Hi superb blog! Does running a blog similar to this require
a large amount of work? I have virtually no understandng of programming however I had beden hoping to start my own blog in the near
future. Anyway, if you have any suggestions or tips for
new blog owners please share. I understand this is offf subject nevertheless I just had to ask.
Thanks!