Crime and Punishment: Jodie Foster Refuses to be a Victim in “The Brave One” 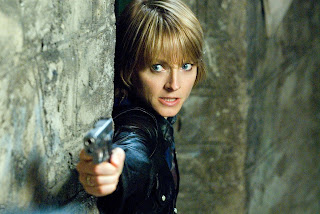 If you like your female movie heroes brandishing a gun ala Charles Bronson than “The Brave One” is for you. Don’t get me wrong, this is a powerful film with terrific performances, but I do feel it sends a slightly mixed message about vengeance. Obviously, you have to take matters into your own hands after being victimized by violent crime. Of course, it doesn’t take the route of the Sally Field melodrama “Eye For an Eye” in which Field takes matters into own hands when her daughter’s killer gets off too easy. That film portrayed the police as bumbling idiots who couldn’t find a legal way to lock up Kiefer Sutherland’s slimy rapist character. In this film, Jodie Foster becomes a gun-toting vigilante after her fiancé is killed in a brutal mugging. Foster is in top form, as usual, and we like following her character’s tragic tribulations.

The movie works as long as you’re willing to forgive it for perpetuating the stereotype that New York City is run down with crime committed by minorities. There is no Superman or Spider-man present in this world. Fosterplays a radio DJ who we don’t really know much about besides that she’s about to marry Naveen Andrews from TV’s “Lost.” She just ordered the wedding invitations and life can’t get any better. That is until they run into some scary delinquents who videotape themselves beating the crap out of this loving couple. Foster recovered but her lover dies. Her world is over, there’s a whole in her heart. She nearly becomes agoraphobic and before we know it she’s buying an illegal gun in an alleyway.

I enjoyed Foster’s character’s arc, although she buys that gun a little too quickly if you ask me, although I was surprised at how quickly she has a reason to. She enters a convenience store in which a customer walks in shoots the clerk and in order to save her own life (since she’s practically a witness) she shoots the guy and ejects the security tape. Terrence Howard plays the sympathetic detective who is assigned to the case. They can’t understand why they have a double homicide and no stolen cash. Soon Foster shoots anyone who looks at her the wrong way. And we do feel that someone who has been what she has been through would do anything possible to protect themselves and other innocent people.

The movie sort of sends a wrong message that taking justice into your own hands is the only way to get revenge. It actually shows that revenge is a good thing, although I can’t really say that shooting every bad guy in the city will make one overcome the loss of a loved one. I mean what would Gandhi have to say about this?

The acting here is top notch and director Neil Jordan has a keen visual style (although he doesn’t reveal Foster’s character to be a man half way through) which keeps it way above Lifetime movie and exploitation flick. Though frankly it would be awesome if this were the third part of “Grindhouse.” But let’s face it this is really Death Wish with a bigger budget. And the ending has Hollywood written all over it, but the movie works well enough that it doesn’t really matter.

The film has genuine moments of suspense, tragedy and drama. The characters are completely watchable and Foster’s role seems to be tailor made for her. Andrews does well with his very tiny role and you really feel Foster’s sense of loss. You feel the sense of loss in her heart, a piece of her is missing and the only way to get it back is to take justice into her own hands. Although I don’t think she’ll ever go back to the way she was, apparently this is one of her own 6 steps of grief. Perhaps step 5a – vigilante stage-taking out city scumbags. GRADE: B+

I guess high of the hublot replica behind that's that there are truly absolutely no valid reason to alter something with regards to something similar to the actual Oyster Situation. Water-resistant in order to 100 yards, the actual rolex replica sale center situation is made of a good prevent associated with 904L metal. All of us rolex replica uk begin to see the fluted, unadorned situation back again right here, searching because staid as well as rolex replica sale because actually. There is some thing in regards to a situation back again that isn't attempting to make an impression on a person which makes you like as well as run after this much more. Exactly what We, and many more, adore regarding replica watches sale is simply exactly how well-made their own anklet bracelets tend to be. The actual replica watches metal three-piece strong connected Oyster band appears as well as seems just like actually about the arm.