She Love’s You Yeah Yeah Yeah: “Feast of Love” Offers a Banquet of Characterizations 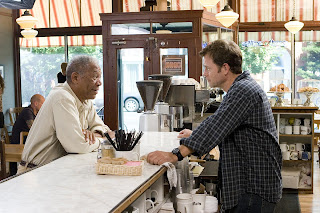 “Feast of Love” is about falling in love and out of love and all the crazy little things that loves makes us do. (Such as buying a dog as present for a loved one who has mentioned a million times that she doesn’t like dogs). Director Robert Benton, who won an Oscar way back in the 1970s for directing the family drama “Kramer Vs. Kramer,” brings a 70s-esque feeling to the standard melodramatic proceedings going on here. There is lots of frank sexuality and dialogue that is a throwback to the character driven dramas of the “New Hollywood.” And that alone is reason enough to indulge on this “Feast.” Please don’t let the title dissuade you: It’s a simply dreadful title. Whatever you may think this is not a pornographic horror film.

We’re introduced to Morgan Freeman’s character Harry who adds yet another splendid narration job to his overcrowded resume. He talks of the Greek gods about why they created love: simply because they had nothing better to do. And that pretty much describes Greg Kinnear’s character Bradley. He’s so emotionally blinded that he doesn’t even realize his wife (Selma Blair) is a lesbian and flirts with a fellow softball player in front of his face. Of course Harry notices, because like most narrators, he’s all seeing and all knowing.

Harry’s marriage to Esther (Jane Alexander) is also slightly on the rocks. It turns out they’ve had a huge loss in life and it’s possible that that void could be filled by Oscar (Tobe Hemingway) and his new co-worker/girlfriend Chloe (Alexa Davalos). Their love blossoms into full bloom before you can say, “This can only end tragically.” (And let’s not even mention Oscar’s drunken father played by Fred Ward, oops too late). Oscar and Chloe are workers at Bradley’s coffee shop where he eventually meets Diana (Radha Mitchell) during a heavy rainstorm. He’s instantly flooded with attraction, but remember I said his emotions are blinded: it turns out she’s having a steady long-term affair with already married David (Billy Burke). And of course Harry doesn’t even know it, but they decide to go ahead and get married. You can see where that’s going

I’m not really sure what the point of all of this is, but I can say that I enjoyed it for the most part. While the situations seemed slightly phony and more appropriate for primetime television, I couldn’t help but feel a little wrapped up in it mostly due to the actor’s great performances. They pretty much sell this weak material themselves. The script was written by Allison Burnett based on Charles Baxter’s novel. While the characters sometimes act like adolescents in the throws of first love, I couldn’t help but want to be a part of it. But I guess, like Bradley I was slightly blinded by the fact that this film doesn’t really add much to cinematic history. I appreciated it for what it is and I never found it to be boring or self-indulgent. I’m a fan of talky drams from Hollywood’s New Wave and this was a decent homage. It’s a little sappy to be sure, but it was enough to fulfill my sweet tooth. But darn it change that title already! GRADE: B

Wow, incredible blog layout! How long have you been blogging for?
you make blogging look easy. The overall look of your site is
magnificent, as well as the content!