Mother Nature’s Son: Director Sean Penn Takes Us on a Visceral Journey “Into the Wild” 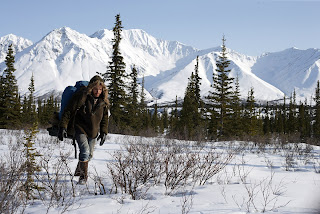 Please I beg of you. Stop reading this and just go see “Into the Wild.” No review can do it justice. It’s one of the best movies of the year. That’s all…and this review does contain some minor spoilers, but anyone familiar with Christopher McCandless’ true story knows what happens.

“Into the Wild” is the true story of two people, except that they’re really the same person. Alex and Chris. Alex used to be Chris. And Chris has become Alex. Emile Hirsch plays both of them with a fascinating intensity. We believe this young man when he decides to run away from his problems instead of facing them. We see the birth (not literally) of a young man’s journey to forget his past life and start anew. He has wiped the slate clean by cutting up his credit cards, destroying his social security card, leaving behind the people that love him and rejecting the formalities of society. He would rather hang out with trees and wild animals. He’s college educated but doesn’t want to feel strained by having a regular career like everyone else. He wants to be different and so does this movie. It’s a film that will grab you and won’t let go. It is potent filmmaking and will have a lasting effect on you long after the credits have rolled.

This movie has a visceral and emotional impact unlike any other film so far this year. No other movie has affected me in such a way that I felt physically altered, as if I was on the adventure with Alex/Chris. The notion Chris could give up his life, essentially erasing his identity and set off on a new life in the wilds of nature is simply crazy and astounding at the same time. Christopher is reborn as Alexander and the process is cathartic. He trades in his hectic family life for that of the unpredictable life of wandering rebel. He runs from the arms of his concerned birth mother to that of Mother Nature.

The scenic shots of the wilderness are amazing and just as breathtaking as anything on National Geographic and here we have characters we care about. Although, I’ve heard they made Chris’ character more likable for the film, which is understandable. I mean, seriously, would you want to spend 2 ½ hours on a cinematic journey through the landscape with someone you didn’t like? Of course not. While he’s not the most likable screen character (some will see him as a spoiled brat who doesn’t think of anyone but himself), I think many people will identify with his rebelliousness. After all, we all were that age once.

Seasoned actors who decide to direct films constantly amaze me. They always come up with great character driven films that have splendid performances. This film reminded me of the work of Clint Eastwood or Tim Robbins, but with out the lumbering pacing. Sean Penn (who also adapted John Krauker’s best seller) has made a movie that is over two hours that never feels overlong. It’s a journey we want to see stretched out forever because we know what will eventually happen to Alex. And just the fact that he signs his last note with his birth name was enough to give me the chills and turn on the waterworks. It’s an ending many will find depressing and that’s because it is. The ending is inevitable and packs an emotional wallop. But ultimately it’s the only ending that works. For someone who was so adamant about forgetting his past, he realized he couldn’t. He was finally able to acknowledge himself as being Chris.

And for a film that’s all about a man’s solo journey it’s filled with lots of supporting characters. First there’s his family William Hurt is dad, Marcia Gay Harden is mom and Jena Malone is sis who narrates the story for us and we get to understand what she’s going through. While abandoning his former life was practically an F U to his parents, he did care for his sister and we feel her loss. They never knew where he was or what he was really up to. And then there are all the colorful people he meets along his journey including Vince Vaughn as a wheat farmer, Catherine keener and Brian Dierker as an wandering, aging hippie couple, Kristen Stuart as a brief young love interest, and as a lonely old man who climbs a small mountain at Alex’s request Hal Holbrook. You really feel Alex has bonded with these people. And who could forget Pearl Jam front man Eddie Vedder’s haunting and well used songs that recall the success of the “The Graduate” soundtrack. Music here is also a supporting character in the film.


This movie is spellbinding and gripping from start to finish. It’s all the little details that add up. Alex makes extra holes in his belt to signify his hunger, which foreshadows...nevermind. The insert shots of animals, ice melting, birds flying, crabs walking are just beautiful. You really feel as if you’re in the wild with Alex. I can’t say enough positives about this film. Just go and see it and be happy. GRADE: A

Way cool! Some very valid points! I appreciate you penning this write-up plus the rest of the site is extremely good.